"We don’t want a nuclear waste dump on our country and worry that if the waste comes it will harm our environment and muda (our lore, creation)"

The Adnyamathanha people are facing a devastating affront to their spiritual land: nuclear waste forever. Josh Meadows reports on the proposed plan for a dumpsite where their ancestors are buried.

If you’re renting a house on a 12-month lease, it would be completely unacceptable to on-sell it to someone else. And no one would think it’s OK to knock down a house you’re renting and build a block of flats. Just imagine the owner’s reaction.

The area has been home to the Adnyamathanha people and their ancestors for thousands of years.  But Grant Chapman, a former Liberal Party senator who holds a pastoral lease at Wallerberdina, plans to on-sell the land so the federal government can build a national facility to store nuclear waste that stays radioactive for thousands of years.

Imagine what the owners think of that idea.

When the area was declared the government’s preferred site in April, Regina told ABC radio it was “like getting news of a death”.

“The area is Adnyamathanha land,” says Traditional Owner Regina McKenzie, who lives at Yappala Station, which adjoins the area nominated for the facility.

“It is arngurla yarta (spiritual land). The proposed dumpsite contains thousands of Aboriginal artefacts. Our ancestors are buried there. We don’t want a nuclear waste dump here on our country and worry that if the waste comes here it will harm our environment and muda (our lore, creation).”

Regina says station owner Grant Chapman did not consult with them before nominating the land.  Mr Chapman confirmed this to ABC TV’s 7.30 programme, saying “it wasn’t appropriate to consult prior to nomination. I mean, it is our property”.

Like many others, Dave Sweeney was very surprised when the beautiful Flinders Ranges was named as the federal government’s preferred location for a radioactive waste dump. 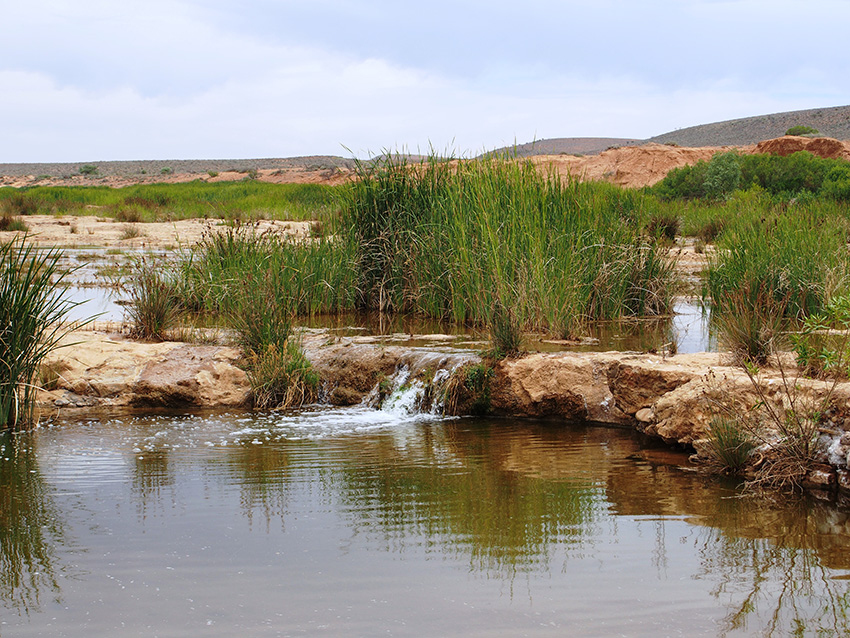 Just one kilometre from the proposed waste dumpsite is Hookina Spring, a special place for the Adnyamathanha, especially the women.

In the midst of this dry country, these springs produce cool, clean water, 365 days a year. The proposed waste dumpsite is only 30 kilometres from Wilpena Pound, the tourist hub of the Flinders Ranges.

“We’re not talking remote Australia,” Dave says. “We’re talking regional Australia with lots of services, lots of grey nomads, lots of school groups going up on a bus for an adventure tour, lots of international travellers and backpackers. And there’s also opportunities for ecotourism, for value adding to food production, cultural tourism, art – all sorts of stuff in that region that also could be compromised by this proposal.”

In contrast, the waste dump would create hardly any new jobs. Dave Sweeney believes it might sustain between six and sixteen jobs after construction – and even that would almost certainly be undertaken by a big capital city engineering contractor, rather than by locals.

“It’s a reasonably short-term thing. The waste isn’t short term, but the actual project is. You build a shed, you build a security fence, you upgrade a road, you dig a trench. You might line the trench and have it concreted and stepped. But basically it’s pretty rudimentary earthworks and engineering. It’s unlikely to generate a lot of local employment.”

So the nomination is not about local jobs.  But it is about long-held beliefs.

"There’s opportunities for ecotourism, for value adding to food production, cultural tourism, art – all sorts of stuff in that region that also could be compromised by this proposal.” 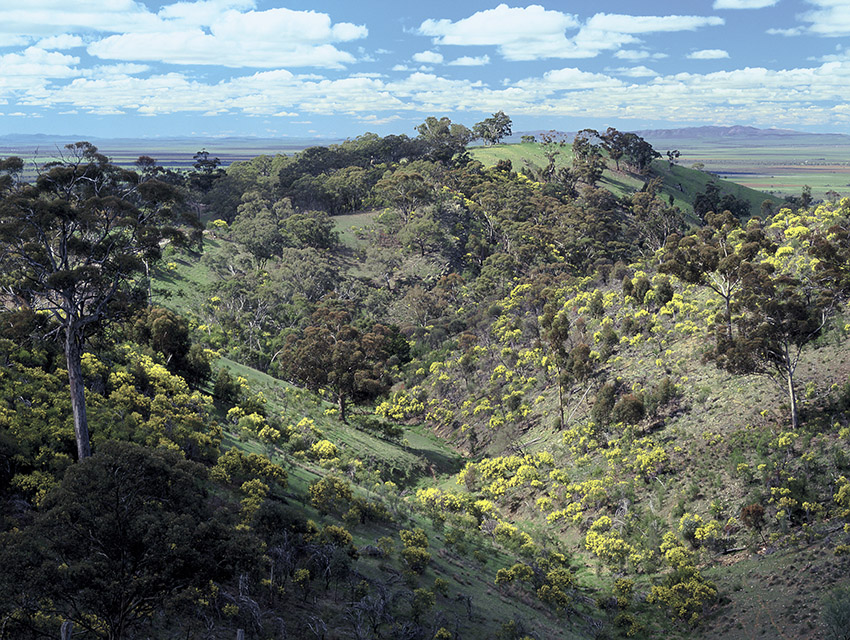 The Flinders Ranges are the largest mountain ranges in South Australia and are a popular tourist destination. Photo: Bette Devine

But is there really a compelling case for a single national site in the outback? Much of Australia’s nuclear waste is generated at the Lucas Heights reactor, operated by the Australian Nuclear Science and Technology Organisation (ANSTO), south of Sydney. Doesn’t it make sense to continue to store the waste there – close to where it is generated, in a well-maintained, secure facility – rather than truck it across the country and impose it on an unwilling community? ANSTO has said it “is capable of handling and storing wastes for long periods of time. There is no difficulty with that.” Whereas dumping it in the Flinders Ranges would create great difficulty for the Adnyamathanha.

So in a cold week in May, with funding raised by the ACF community, Conservation SA and Friends of the Earth, Traditional Owner Regina McKenzie and her sister Vivienne travelled from the Flinders Ranges to Melbourne to meet with federal minister Josh Frydenberg. Minister Frydenberg spent two hours with the McKenzie sisters and listened to their concerns about the waste dump proposal.  (The former Labor Resources Minister Martin Ferguson rejected numerous requests by Aboriginal Traditional Owners from Muckaty in the Northern Territory, who wanted to meet with him to discuss plans for a dump on their land.)

Minister Frydenberg told NITV “legitimate issues have been raised about the Indigenous heritage in the broader area” and said the government would “undertake a comprehensive and independent heritage assessment and further consult with key stakeholders before any final decisions are made”.

Since then a post-election Cabinet re-shuffle made Mr Frydenberg the new Minister for Environment and Energy. This means the responsibility for the waste dump issue now rests with Nationals Senator Matt Canavan. 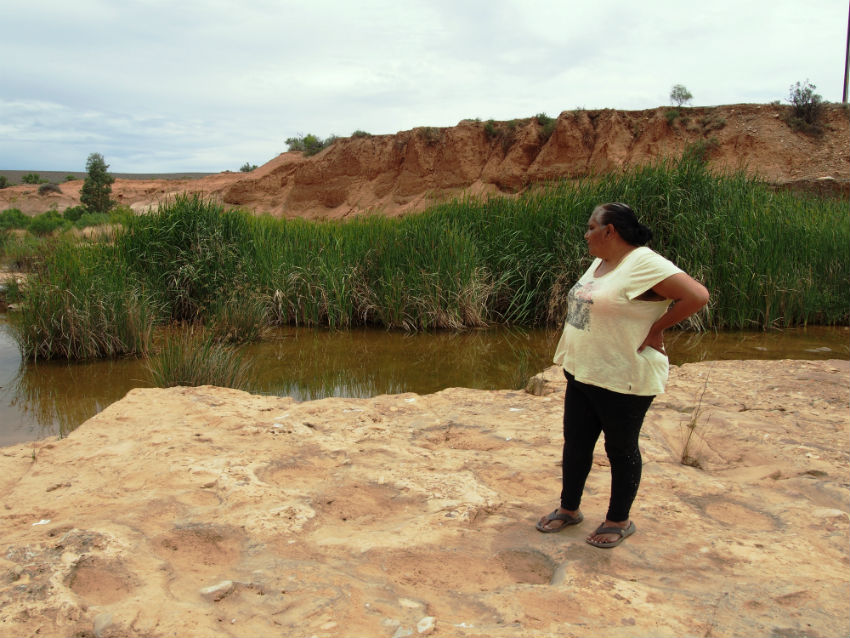 Dave Sweeney is convinced the Adnyamathanha people can stop the dump.

He urges doubters to remember the example of the Muckaty Traditional Owners.  They were from a remote part of Australia.  All the key institutions were against them: the federal government, the Northern Territory Government, even their representative Aboriginal body, the Northern Land Council.  Yet, with the support of conservation groups, churches and unions, they saw off Minister Ferguson and his nuclear waste plan.

Dave hopes Minister Canavan will champion a more mature debate about how Australia handles radioactive material, rather than continue to search for a vulnerable postcode.  He hopes the new minister will understand it’s not a question of changing the messaging or offering bigger inducements to the Adnyamathanha.

Nominate someone for the 2017 ACF Conservation Award