ACF analysis of federal and Queensland donation return data shows Adani has given $60,800 to the Liberal and National parties since the last federal election.

The admission by Liberal National MP Michelle Landry that Adani contributed to her election campaign, but she doesn’t know how much the company contributed, raises major concerns about whether Adani is buying political influence to help push through approvals for its climate-wrecking coal mine, the Australian Conservation Foundation (ACF) said.

ACF analysis of federal and Queensland donation return data shows Adani has given the Liberal and National parties $60,800 since the last federal election. One Nation has received $30,000 from Adani. Labor received $2,200, but later returned the money to the company.

ACF’s Stop Adani campaigner, Christian Slattery, said Queensland has real-time donation disclosure laws, but at the federal level it can take up to 18 months for political contributions to be made public. That means there are likely to be more donations from Adani to political parties that have not yet seen the light of day, he said. 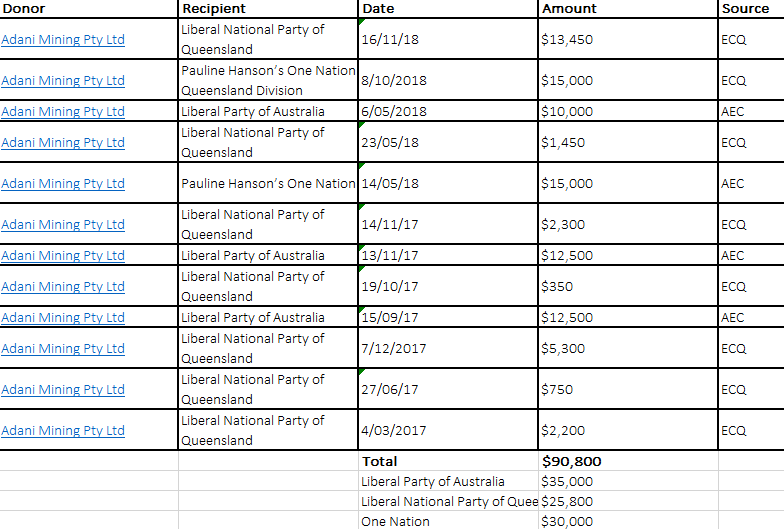 “A company like Adani that is going through a significant approval process does not hand out its cash to politicians without expecting something in return,” Mr Slattery said.

“In the final days of the last parliament we saw extraordinary scenes where a handful of Queensland MPs bullied the Federal Environment Minister into rushing through an approval for Adani’s plan to guzzle Queensland’s groundwater.

“All parties and MPs, but especially those Coalition members who put pressure on the Environment Minister, should explain how much cash they are getting from Adani.

“We don’t know how much more money Adani has donated to federal political parties for this election campaign.

“This highlights the need for reform of Australia’s political donations regime to ensure real-time disclosure.

“Adani’s massive coal mine is opposed by most Australians, who understand burning the coal that will be dug out of the mine will accelerate dangerous climate change and the destruction of the Great Barrier Reef.

“Adani’s coal mine will also suck up billions of litres of Queensland’s precious clean water and destroy some of the last remaining habitat for endangered creatures like the Black-throated finch.

“Australians should be able to feel confident that their elected representatives are working in the best interests of clean air, clean water and stopping climate change.

“Australians should rightly ask whose side our elected representatives are on when it comes to this coal mine – a multi-billion-dollar corporate looking to fill its coffers or the safety of our communities and the health of our environment?”

Together we made this the #ClimateElection

Where do the parties stand on extinction?