Muswellbrook in the Hunter Valley in NSW, Traralgon in Victoria’s Latrobe Valley, Gladstone, Stanwell and Tarong in Queensland and Collie in WA are all centres for coal burning – and are all are in the top 10 postcodes for five dangerous pollutants: coarse particles (PM10), fine particles (PM2.5), sulphur dioxide (SO2), mercury and oxides of nitrogen (NOx).

The other postcodes in the top 10 – Mount Isa in Queensland and Newman, Tom Price and Kalgoorlie in WA – host iron ore, copper, lead, zinc, silver and gold mines.

“Coal-fired power continues to be a major contributor to serious health problems in Australia.

“This is most likely due to the facility’s ageing – and in some instances failing – infrastructure.

“The direct health impacts of air pollution are worst for children and old people – the same groups that are most affected by heatwaves, which are more frequent due to climate change.

“Australia’s air pollution standards are fragmented and in many cases weaker than the standards recommended by the World Health Organisation.

“Closing coal-fired power stations is essential to tackling climate change, but without a federal plan to manage the transition, the changes will be highly disruptive for certain communities.

“This is an election issue, with communities in Gladstone, the Hunter Valley and the Latrobe Valley pleading for greater certainty about their futures and all Australians wanting cleaner air and less pollution in their streets and backyards.”

The top 10 most polluted postcodes in Australia

Host of copper, lead, zinc and silver mines. Seventeen facilities in postcode reported pollutants of concern in the latest NPI. Mount Isa Mines, operated by Glencore, is responsible for 91% of the postcode’s emissions. Mount Isa Mines is Australia’s biggest polluter of SO2.

Christmas Creek iron ore mine, operated Fortescue Metals Group, is the top polluting facility, responsible for about 23% of the postcode’s emissions. Fine and coarse particle pollution from the Christmas Creek mine has been steadily increasing over the last four reporting periods.

Iron ore mining centre with 16 facilities in the postcode reporting the pollutants of concern. Coarse particle pollution is the biggest problem. This can be mitigated by appropriate and progressive rehabilitation of mined land.

In Victoria’s Latrobe Valley, Traralgon is host to AGL’s Loy Yang coal-fired power station – the second biggest polluting facility in Australia for SO2 and third highest for NOx. Exposure to NOx can irritate eyes and lead to coughing, shortness of breath, tiredness and nausea. High exposure can cause a build-up of fluid in the lungs, and even death.

Industrial centre on central Queensland coast. Coal-fired power station is in suburbs of town. Fine particle pollution (PM2.5), which is drawn down deep into the lungs and can cause asthma, stroke and heart attacks, has increased every year over last four reporting periods.

Muja Power Station is responsible for 34% of the postcode’s emissions.

Tarong coal-fired power station is responsible for 80% of the postcode’s emissions.

Known for silver, mercury, lead and gold mines. There are 18 facilities in the postcode reporting pollutants of concern. 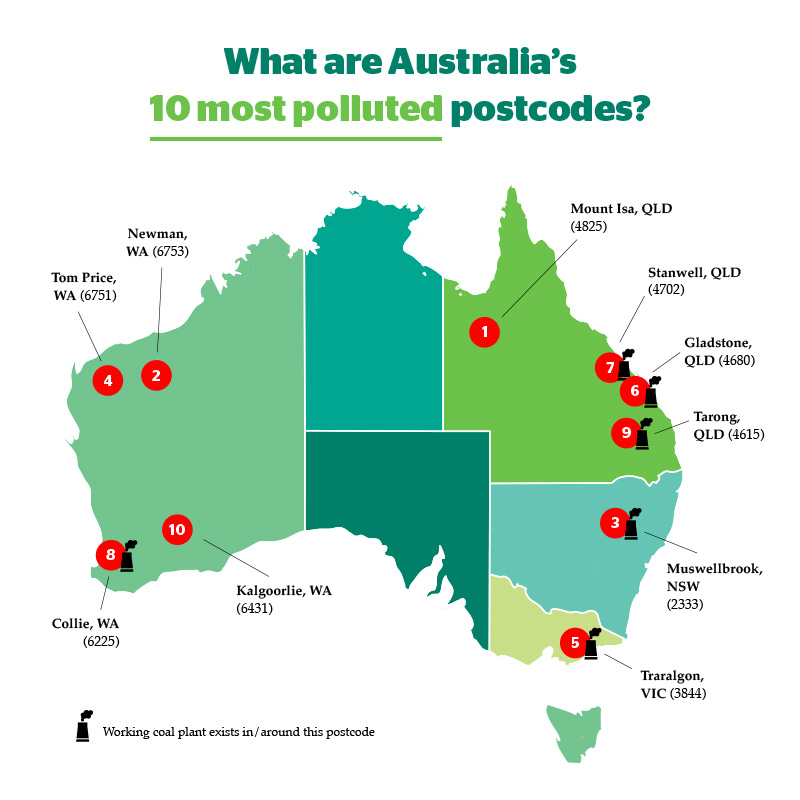