We deserve to know the impact polluting facilities like power stations and mines have on our communities – to better protect people’s health today, and to help us advocate for solutions like renewable energy that are good for people and planet, and ready to go.

That’s why ACF delved into the latest National Pollutant Inventory’s emission data, collected annually from big polluters like power stations, mines and manufacturing plants. Read on to find out more about the air pollution that digging and burning coal imposes on surrounding communities.

Six of the ten most polluted postcodes host coal

Air pollution from digging and burning coal is a major health hazard for many Australian communities, and will only continue without a real plan to replace ageing and failing coal-fired power stations with renewable energy.

ACF’s analysis of the National Pollutant Inventory’s emission data reveals that six of the ten postcodes with the highest air pollution host a coal-fired power station or coal mine. 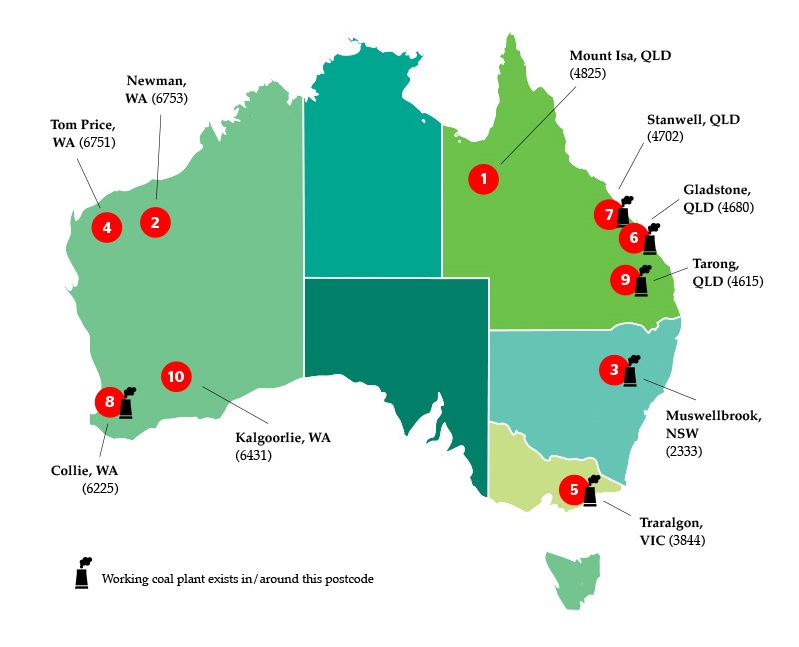 The ten Australian postcodes with the highest aggregate levels of five dangerous air pollutants – PM10, PM2.5, SO2, NOx and mercury.

Such poor and inconsistent performance from coal plants calls into question the fragmented air quality standards in Australia. Standards are applied by each state, and in some cases are weaker than World Health Organisation recommendations.

That means some communities in Australia are more protected than others. Australia lacks consistently applied national air quality standards that can pull poor performers into line, and ensure plant operators are paying for maintenance and new technologies that keep air pollution down and protect communities. 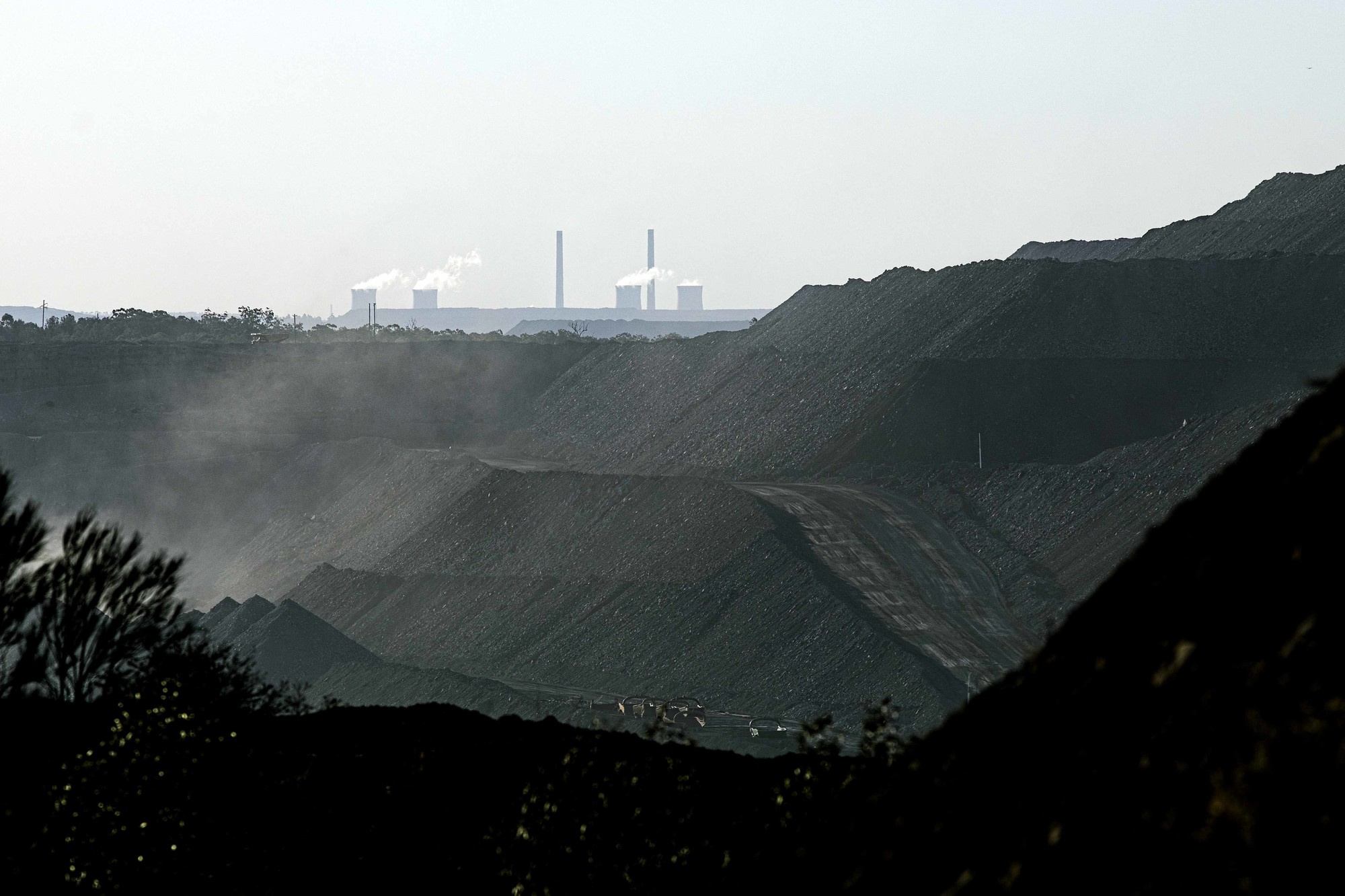 We need a plan to protect health

The health effects of burning coal are two-fold. Day to day, burning coal emits harmful pollutants that people breathe in, causing all sorts of health problems including asthma, emphysema, chronic bronchitis and other respiratory diseases.

By also being a major source of carbon pollution, burning coal fuels climate damage and increases the risk of heatwaves, floods and harmful pollen seasons.

The direct health impacts of air pollution are worst for children and old people – the same groups that are most affected by heatwaves – and in total kills around 3,000 people every year, almost three times the national road toll.

Climate is a big issue this election year, but with the right safeguards climate action can mean cleaner air for communities living near coal facilities too.

That’s why Australia needs new, nationally consistent air quality standards that are applied to all facilities and a plan to manage the inevitable shift to a clean energy future – to limit the health impacts of coal on communities now, and to avoid the worst extremes of climate damage.

Join over 25,000 people from all walks of life in the Together We Can movement who are calling on decision makers to take real climate action that puts communities and our health first.

Join Together We Can

We need to put communities first

Air pollution is a real concern for residents of Gladstone (postcode 4680, ranked 6th), home to one of the oldest and dirtiest coal plants in Queensland.

Visible pollution and maintenance concerns at Gladstone Power Station have gained media attention in 2020 and 2021, and ACFs analysis shows its PM10 and PM2.5 emissions rising every year since 2017/18.

Gladstone Power Station’s inadequate operating licence, under Queensland’s already sub-standard air pollution rules, leaves the community in the dark about how bad the pollution in their homes and backyards actually is.

Local backing for a future where renewables phase out coal is growing fast, and a transition that puts the community first is viewed widely as a job creator and job protector in Gladstone and broader Central Queensland.

Big renewable projects, like the $2 billion pumped hydro and green hydrogen facility proposed for Miriam Vale near Gladstone, will bring in hundreds of jobs to the region. Transforming Gladstone into a renewable energy hub can also deliver the low energy prices and supply needed for the aluminium industry to thrive and continue to provide thousands of jobs.

For community campaigner and Gladstone local Jaclyn McCosker, the energy in the community is there – what’s missing is the state and federal government putting communities like her’s at the heart of energy transition plans. 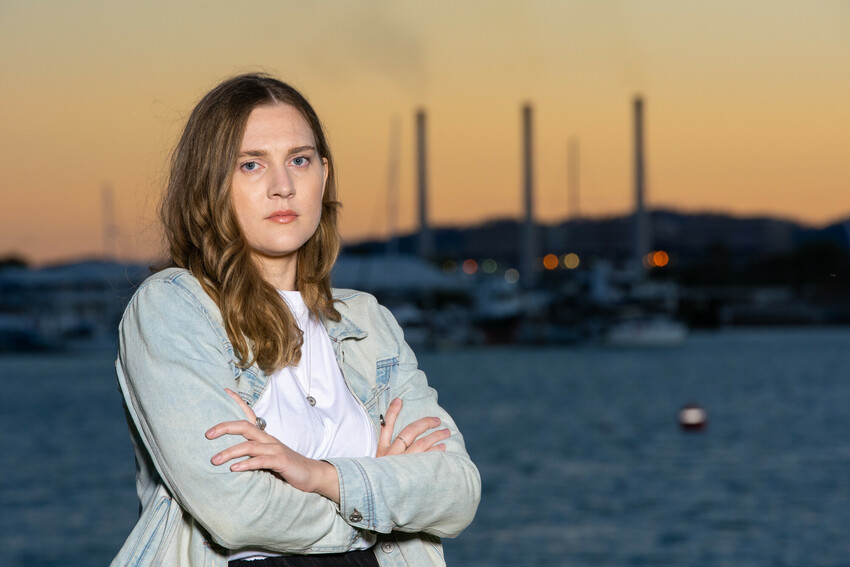 “We're industrious, we have some of the most highly skilled workers in the world right here in Central Queensland. We have the brightest minds, we are full of engineers, and we have all of the capacity."

“So let’s deploy climate solutions fast enough to address the climate crisis, but do it in a way that's genuinely constructive and positive for the people that actually live in these carbon intensive regions. If anyone can actually lead an energy transition, it's likely going to be Gladstone.”

Are you in the Gladstone region and keen to connect with others in the ACF community there? Sign up to hear from ACF Community Gladstone group.

What do we want Australia to be in the net zero world?