The safeguard mechanism – Australia’s system for limiting carbon pollution from big industry – has provided a free pass to Australia’s largest polluters for many years. It has been labelled a ‘toothless tiger’ and a ‘do nothing policy’.

But the safeguard is about to get a huge facelift and become one of the most important levers for the Albanese Government to achieve its 43% by 2030 target and we hope, go well beyond, in line with the science.

Right now, the safeguard covers 28% of Australia’s annual emissions that are released by our most carbon-polluting industrial facilities and sites. More than half of these are coal mines and oil and gas projects run by big companies that have disproportionately created the climate crisis through excessive pollution.

ACF’s Investigations Unit has analysed five years' worth of data from the safeguard, and here is what we found.

The following companies are responsible for more than half of all emissions under the safeguard mechanism. 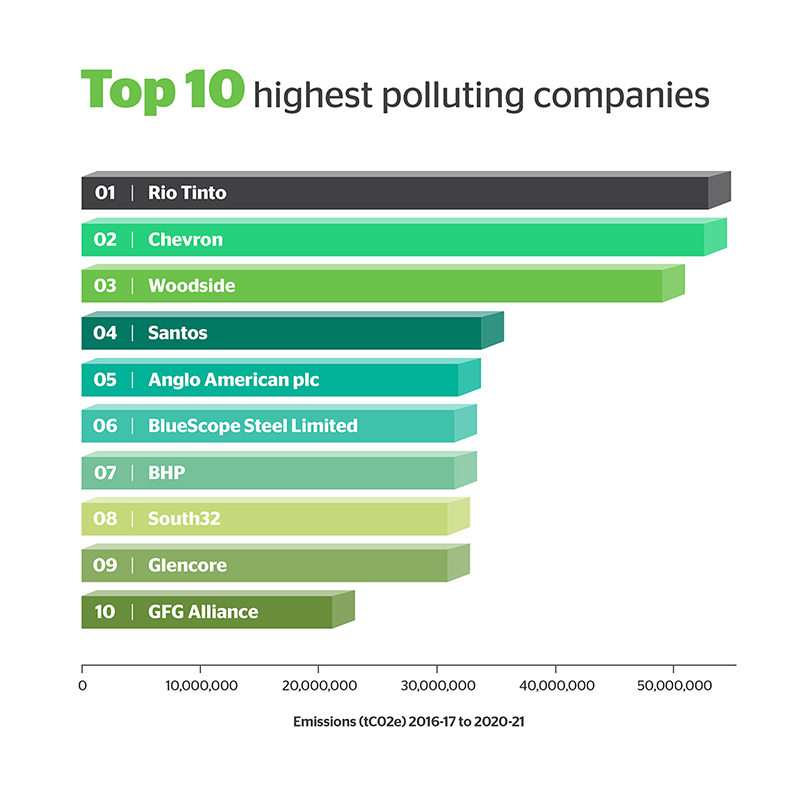 The top ten companies are responsible for polluting 362 million tonnes of carbon dioxide equivalent (MtCO2e) over the last five years.

For perspective, Australian cars emitted roughly 215 MtCO2e over that same time. So if you’re feeling guilty about driving to the shops, take a moment to reflect on the role of Australia’s big polluters and give yourself a break! The damage is being done at the top and the safeguard is doing very little to stop it.

The following facilities are the most heavily polluting projects under the safeguard mechanism. 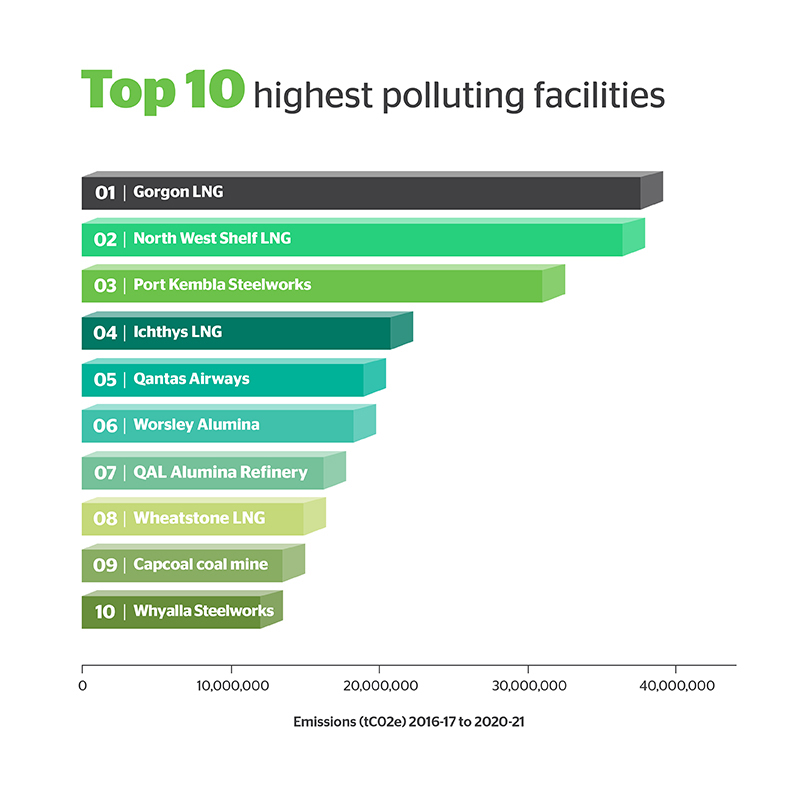 They represent gas, coal, steel and alumina production, as well as air transport. Ichthys, Wheatstone and Gorgon only started producing gas in 2018, 2017 and 2016 respectively. The government of the time and the companies well and truly knew about the climate crisis when these projects were approved – but they proceeded anyway.

We’ve learned that Ichthys, Gorgon and Wheatstone are responsible for about 73 MtCO2e emissions in the last five years and about 11% of all pollution under the safeguard mechanism.

New gas proposals, like the Scarborough and Beetaloo Basins, could easily jump onto this list in the coming years, pollute heavily and undermine the Safeguard. Plus, we know several polluting coal mines that report under the Safeguard have plans to expand or extend, equivalent to at least an extra 12 MtCO2e a year – which would be a further disaster for the climate.

Emissions have increased since the safeguard started, limits are sky-high and companies can get away with huge blowouts.

Since the Safeguard commenced in 2016, pollution has increased by more than 7% – an extra 9 million tonnes of carbon equivalent. For perspective, to sequester or abate that amount of carbon, you would have to grow 149 million seedlings for a decade or take 2 million cars off the road for a year.

While pollution from coal mines has increased only slightly, pollution from gas and oil extraction has ballooned by 20%, which is proof this policy isn’t working in favour of the environment. 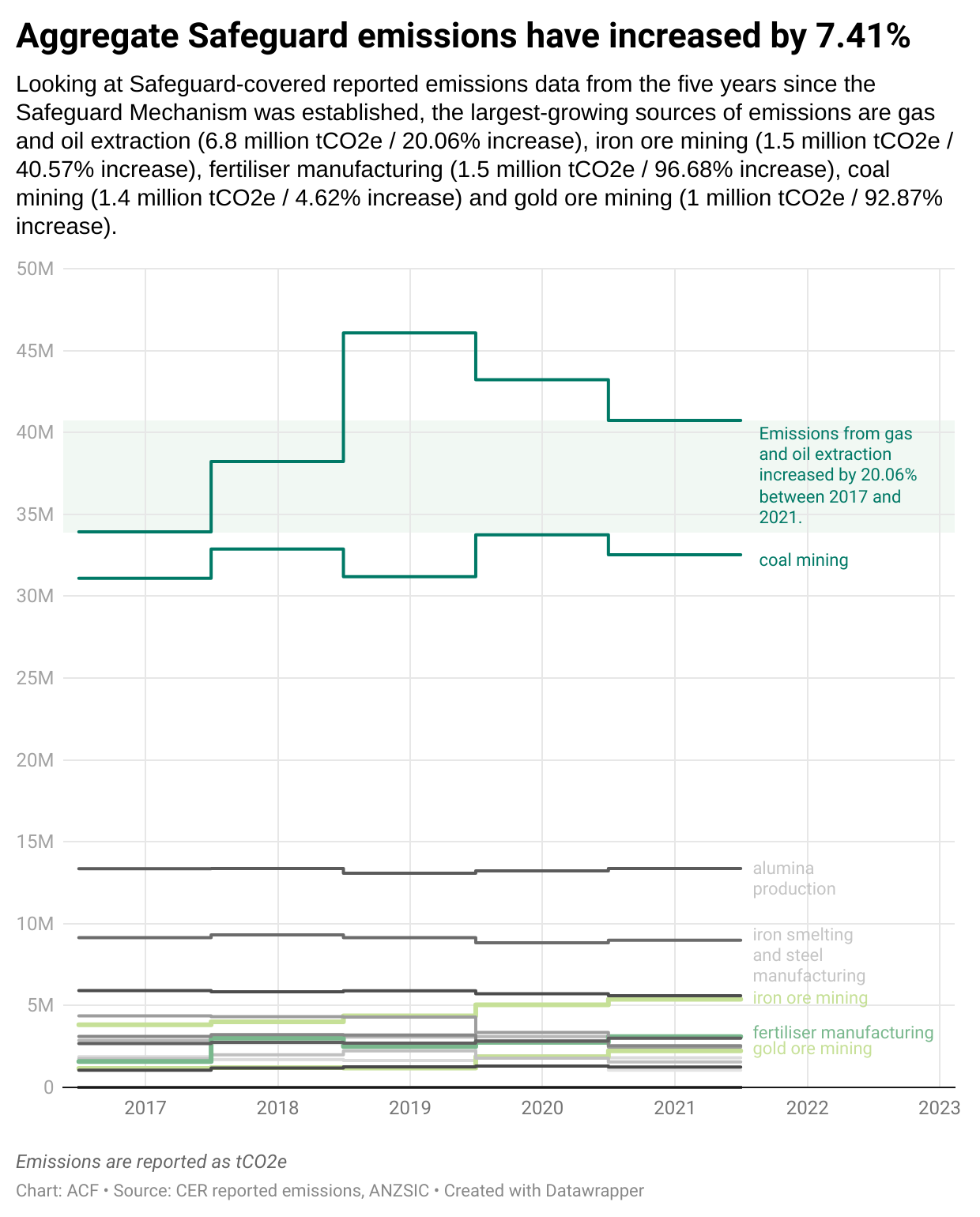 Get out of jail free card

Pollution has been able to increase without punishment because the limits put on facilities are often so high it would be impossible to exceed them. 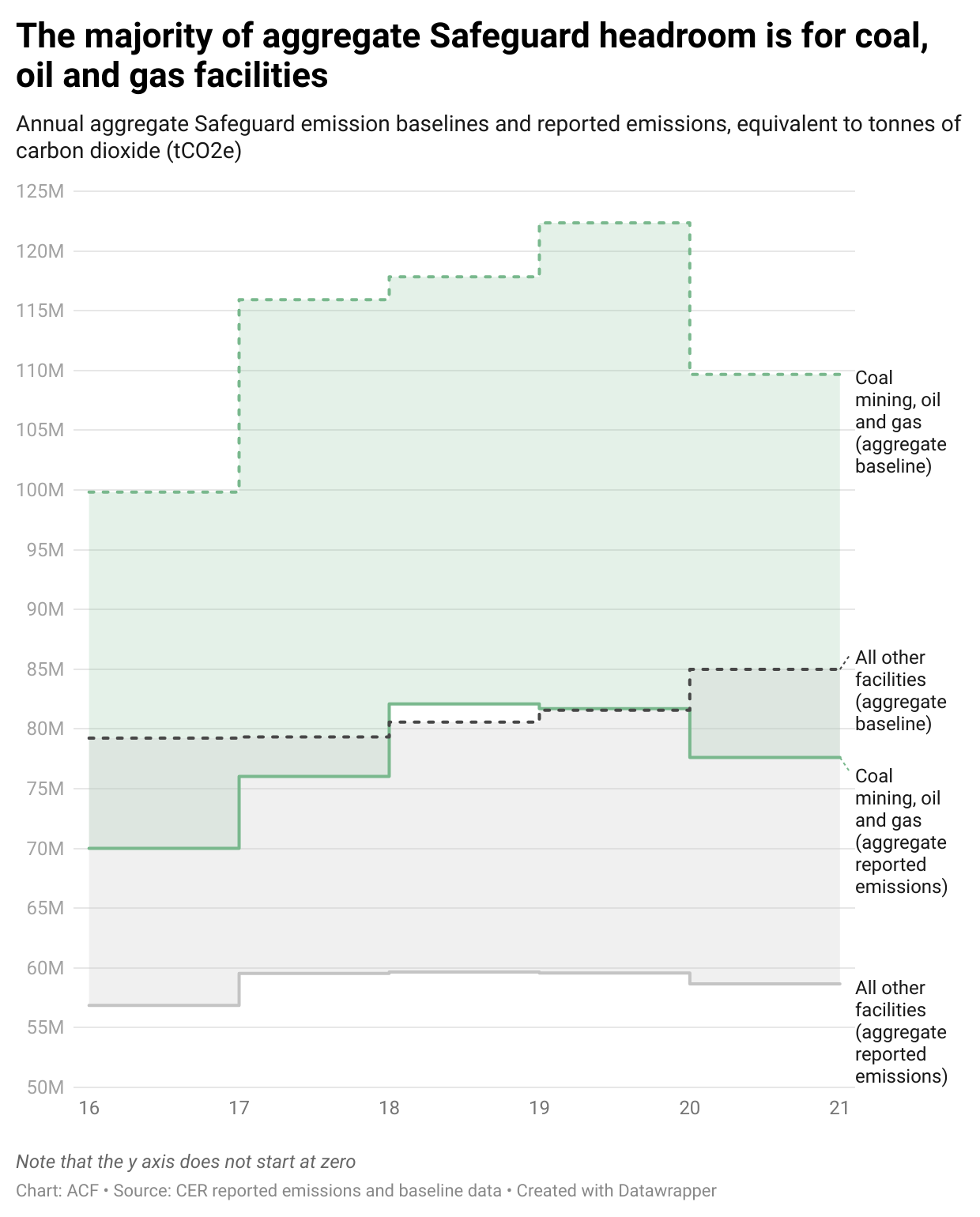 The difference between actual pollution and limits on pollution is called ‘headroom’. Our analysis shows that coal mining, oil and gas have the most headroom.

Even with all this headroom, some facilities have managed to blow their limits. Often companies can apply to change their limit after the fact so that they are not punished. They can also enter a ‘multi-year monitoring period’. These allow facilities to avoid penalties for peaks in emissions by averaging out emissions reported over two to three years (four years during COVID19).

Around a quarter of all safeguard facilities have used this loophole over the past five years.

The problem is that companies can increase their limits while in a multi-year monitoring period. Our data shows most companies also increased their limits afterwards. So, while pollution is meant to even out over the two to three years, our data shows that about 40% of facilities ended up increasing their pollution significantly. Plus, only a handful of companies ever had to surrender carbon credits to make up for it. 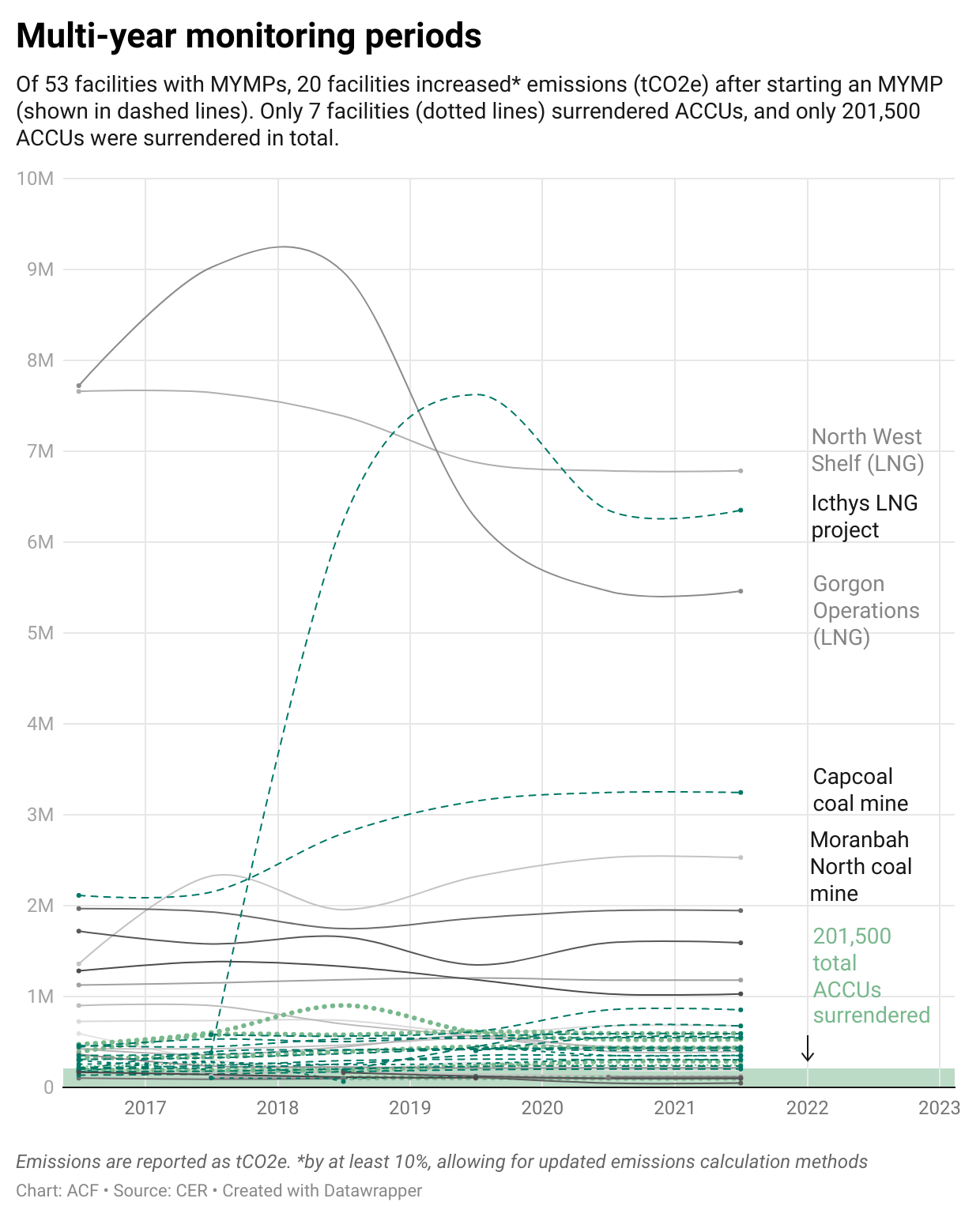 The safeguard was designed to keep the collective pollution from large polluters at the same level. It did not have lofty goals, and yet it was an abject failure. Now, we need to see the same lever drive deep cuts to emissions. It is possible, but it won’t happen without huge changes and it won’t happen if the government only listens to industry again.

Industry has been enjoying free lunches for too long – it’s time for our big polluters to pull their weight.