A nation powered by clean energy is not only possible, it is necessary to protect our beautiful and fragile island continent from dangerous climate change and provide reliable and affordable energy for all.

We've brought together an unlikely coalition of 17 eminent people to call on our federal government to step up and drive Australia's transition to clean energy.

Bound by their concern for Australia's future, together these leaders have developed a detailed blueprint outlining the national energy transition plan our federal government must make to shift Australia to clean energy: 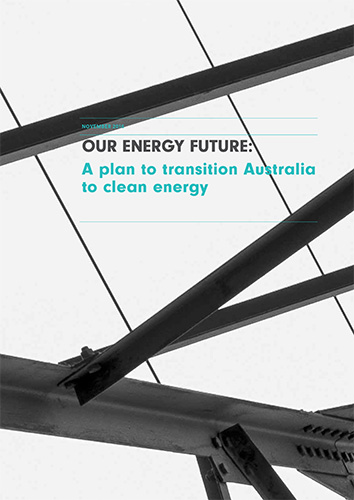 The story of energy – past, present and future

In the beginning there was wind, water, fire. Canvas snatched the wind and carried us around the globe. Massive millstones turned under the force of rushing streams. A world lit by wood and wax flared brighter with the discovery of whale oil, and coastal cities grew up on that trade.

Change came, as it always does. In 1850, the whaling port New Bedford, Massachusetts, known as “the city that lit the world” was the richest town in America. Nine years later, petroleum was discovered in Pennsylvania and in an eyeblink, New Bedford dwindled into blight and poverty.

Oil, coal and gas powered a new age of industry. Sail gave way to steam and ships to planes, rail and superhighways. All this happened in the span of a single lifetime: less than a century from the Wright brothers to the Concorde, a few decades from the horse and cart to interstate highways.

Now, once again, change is coming. Our use of carbon fuels has seared our planet.

We are smashing temperature records globally, month after month and year after year. This year is on track to be the hottest on record, as was the last, and the one before that.

Massive climate disruption is not a problem for the future. It is a problem now. We cannot ignore physics and keep powering our lives with energy sources that ravage our only home.

We have no choice but to face the urgent need for change. The only choice we have is how we manage it.

The change we must make can lead to healthier lives and economic certainty; it can unleash billions in increased investment and create innovative jobs. It is a future in which Australia becomes known as a progressive world leader in clean energy, rather than as the world’s biggest per capita polluter.

Change will come. Australia’s choice is to embrace the transition and the economic opportunities it brings. To plan for inevitable changes to our energy sectors and economy and make sure the transition is fair for all. Or we can resist and delay and deal with consequences of an unmanaged and chaotic transition that harms our communities and our economy and fails to rapidly lower our climate pollution. This transition won’t always be easy, but by accepting necessity and acting with speed and clarity, we can buffer any negative impact and protect vulnerable businesses and populations.

We are calling on our federal government to lead a national energy transition plan to shift Australia to clean energy, through engaging across parliament and with all levels of government, communities, workers and businesses. The plan should drive a transition to clean energy by 2050, or sooner, to meet our international obligations under the 2015 Paris Climate Agreement.

The plan needs to establish rules, policies, regulations, markets and a basis for investment that will power the transition. It must be founded on a just transition for workers and communities.

The blueprint details eight foundational actions that should form the basis of Australia’s national plan: