Amid the torrid February-March sittings of federal parliament, the Morrison Government’s latest environment bill (which does little to actually protect nature and wildlife in Australia) was referred to a Senate inquiry.

Meanwhile, Independent MP Andrew Wilkie introduced a bill to create an independent national Environmental Protection Agency, and the House of Representatives set up a new energy inquiry in another attempt to promote nuclear energy.

Bills that would undermine our green banks, impose a nuclear waste dump on South Australian communities, and hand over environmental decision making powers to the states and territories remain on the Morrison Government’s agenda.

So let’s keep up our brilliant and powerful advocacy for the planet and people!

The Morrison Government’s latest attempt at environmental law reform is another lost opportunity to solve the extinction crisis.

Minister for the Environment Minister Sussan Ley introduced the Environment Protection and Biodiversity Conservation Amendment (Standards and Assurance) Bill 2021 on 25 February which the Upper House immediately referred to the Senate Environment and Communications Legislation Committee for an inquiry that will report on 1 June.

The Government needs one additional vote in the Senate to pass its Streamlining Approvals bill (assuming the two One Nation senators will support the government’s Bill).

While a first, small step towards delivering needed reform, the EPBC Standards and Assurance Bill does little – if anything – to actually protect nature and wildlife in Australia.

The bill would create a national environmental standards framework and a National Environment Assurance commissioner, but leaves gaping loopholes that pose a serious risk to environmental protection.

His final report provided draft standards that should be implemented immediately as part of a comprehensive package of reforms.

However the Morrison Government has disregarded the standards proposed by Professor Samuel and instead proposed its own “interim environmental standards” which merely outline the processes and do not guide outcomes.

The Standards and Assurances bill would prevent parliament from scrutinising the interim standards (through a “disallowance motion”), and there’s no provision to automatically remove or improve them.

Without strong outcome-oriented National Environmental Standards there is little chance we can reverse Australia’s extinction crisis and protect our wildlife, forests, rivers and wetlands for future generations.

But it would have no dedicated staff and have to ask the already underfunded environment department for resources.

The EAC would be unable to audit the approval of individual projects, which kind of defeats its purpose.

Submissions to the Senate Environment and Communications Legislation Committee inquiry on the bill have now closed. The Committee is due to report on 1 June.

We expect the two pieces of legislation will eventually be joined together as a package and again presented to the parliament in coming months.

If passed in their current form, the Morrison Governments’ two EPBC bills will lock in Professor Samuel’s key finding: "the continued decline of our iconic places and the extinction of our most threatened plants, animals and ecosystems.”

But through the Senate Inquiry and community pressure on our MP’s and senators we can hold the government to account and drive major improvements in the Standards and Assurance bill.

ACF has called on the Morrison Government to stop cherry-picking reforms and respond fully to the 10-year review of the EPBC Act by Professor Samuel which made 38 recommendations. But there’s no sign the government intends to produce a comprehensive response.

Let’s keep up the pressure! If you're not part of an ACF Community group just yet, join today.

Tasmanian Independent MP Andrew Wilkie has moved ahead of the Morrison Government and introduced a bill to create an independent national Environment Protection Authority.

The Commonwealth Environment Protection Authority Bill 2021 would be an ‘independent cop on the beat’ to monitor compliance with our national environment law, as recommended by the recent 10-year review of the Environment Protection and Biodiversity Conservation Act (EPBC Act) by Professor Graeme Samuel. An independent national EPA reporting to the parliament is also Labor party policy.

“Time and time again governments have failed to ensure effective enforcement of our environmental laws,” Wilkie said. “This EPA will be a completely independent body that depoliticises, streamlines and strengthens environmental regulation.”

The bill’s explanatory memorandum says the “current administration of the EPBC is damaging to the environment and to public trust in Commonwealth environmental laws.

Given Australia’s poor track record in protecting our natural environment – shown by a high extinction rate and evidence that numerous ecosystems are on the verge of collapse – it’s clear that a new regulatory regime needs to be set up.”

Wilkie called on both major parties to support his private members Bill but it’s unlikely to pass the Lower House without support from Coalition MP’s as Katter Party MP Bob Katter and Independent MP Craig Kelly consistently vote with the Coalition ensuring non-government legislation and motions are defeated.

ACF has welcomed the bill and urged MPs to refer this important Bill to a parliamentary inquiry to allow for community input and debate in our Parliament.

A new inquiry into energy transmission ought to canvass critical questions about the nation’s future energy and electricity system, and what government action is needed for Australia to become a clean energy superpower.

Yet a government media release announcing the inquiry positions renewable energy as the problem, not the solution. And a new push by some parliamentarians suggests it’s part of yet another pro-nuclear campaign.

The inquiry into dispatchable energy generation and storage capability in Australia was referred to the House of Representatives Standing Committee on the Environment and Energy by Minister for Energy and Emissions Reduction Angus Taylor on 24 March.

Its terms of reference are very broad. From electricity system integration, connection, and transmission now and in the future, to exploring “existing, new and emerging technologies” and their “comparative efficiency, cost, timeliness of development and delivery”.

This implies the Committee will consider how cheap, reliable and clean renewable energy technologies stack up against polluting fossil fuel and nuclear energy.

We expect to hear pro-nuclear advocates arguing for the lifting of Australia’s prohibition on nuclear energy, just as we’re seeing renewed push in parliament to adopt this dangerous and expensive technology.

Submissions are due on 7 May. We’ll share ACF’s submission to the eight member government-controlled Committee as soon as we can. 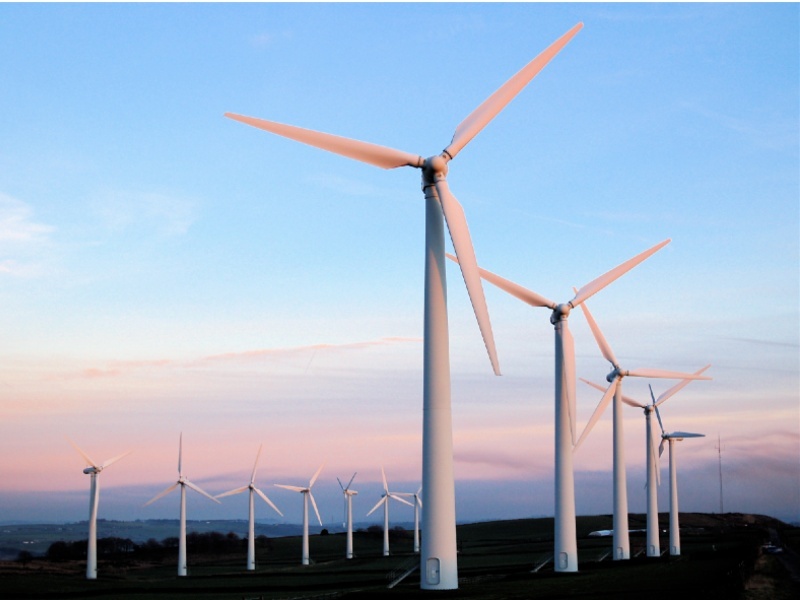 "Our shared energy future is renewable, not radioactive"

This year, the big focus for ACF Community groups is developing strategic alliances that will leverage support from our political representatives.

35 people from community groups have attended the ‘Intro to alliance building’ online training and have started community mapping and MP research with their community group to plan their outreach efforts.

21 people from 4 newly formed community groups in 2020 attended our 2-days Activate training in NSW. The energy was spectacular. People were sharing their experiences of meetings with their MP and campaigning on the Recover, Rebuild, Renew strategy before commencing Alliance Building work.

30 dedicated Queensland leaders attended the best ever all-day Leader’s Training in March. They focused on the Groups’ priorities for the next 6 months and a deep dive session into Alliance Building.

The goal is not only to take the conversation into their MP meetings, but to build lasting relationships with the communities to understand how ACF objectives intersect with everyone’s needs and futures. 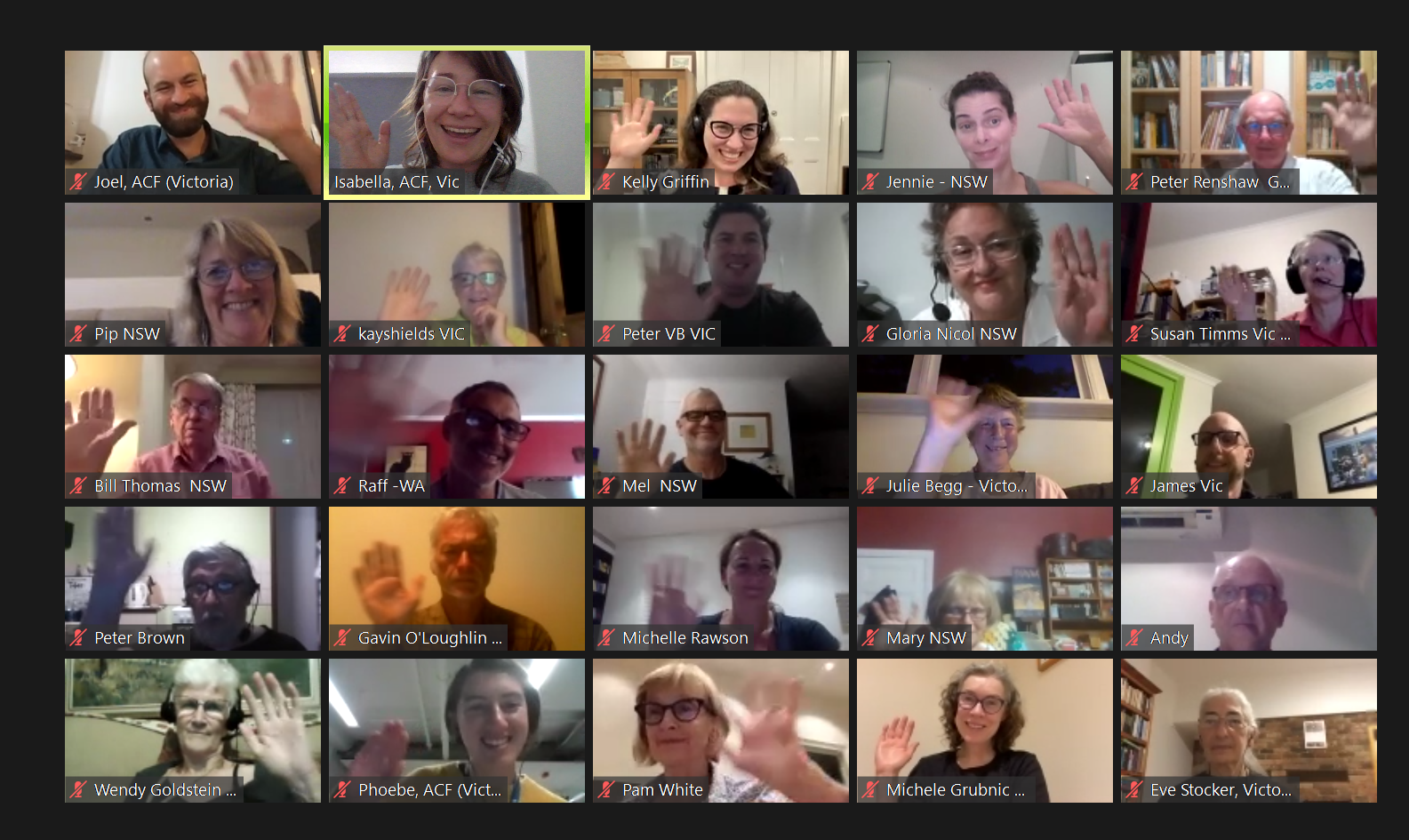 45 supporters who joined us for training of effective MP meeting

Keep an eye on the training calendar for the next ‘Intro to Alliance building’ online training coming soon. 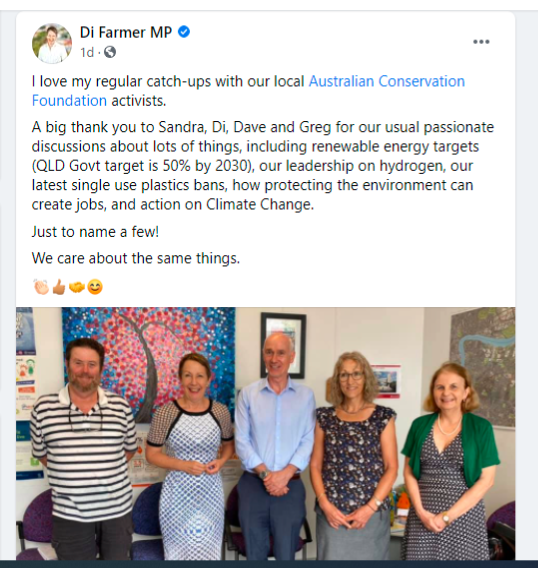 This year, we have a once in a decade opportunity to strengthen our national environment laws so they will actually protect nature.

ACF community groups will play an important role. Come along to the next ACF Community webinar on Tuesday 12 April to find out more!