Sending a media release to local, state and national media is a great way to tell journalists about your event, stunt or action.

If your media release is directed at news media, write in their style. Short, punchy sentences, a strong headline, and good quotes are all important. Your media release should be a single A4 page at most.

The inverted triangle method is a useful way to structure media releases. Always lead with the most important information right at the top, and include minor, background and less important info lower down. 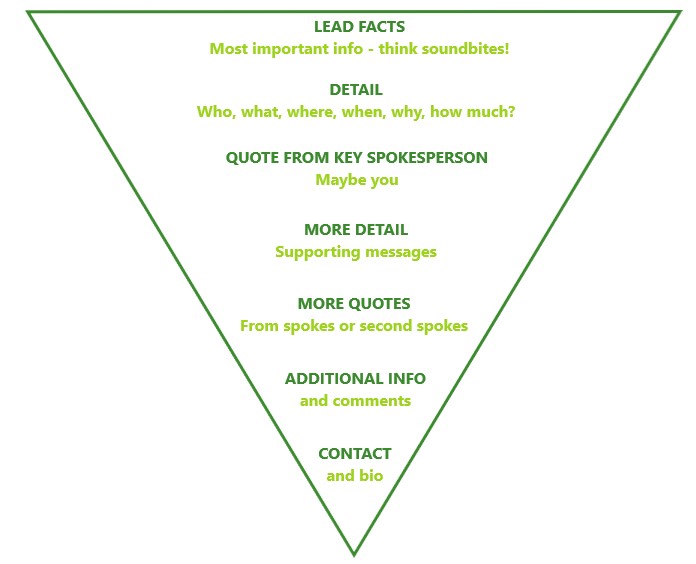 Journalists can be time and resource poor, so make it easy for them and put everything in one place – provide any extra information or websites you think are relevant, and include some photos of your group in action.

Include a short case study if you can too – news stories in print media often include a case study as a breakout.

If you have key spokespeople available for interview, include their names and contact details too.

Here’s a sample to get you started:

Doorknock to end coal (sample title, replace with your own)

(TOWN/SUBURB) - Dozens of (town/suburb) residents have been doorknocking and conducting surveys around (town/suburb) today to stop Adani, as part of the Stop Adani Big National Doorknock weekend.

Volunteers were speaking with local residents to hear their views on the proposed Adani Carmichael coal mine in Queensland, and their views on coal in general. The proposed Adani mine would be the largest in Australia, and is causing serious concerns about its high levels of water usage in a state currently suffering from drought.

(sample spokesperson quote, replace with your own personalised quote) “Adani is really symbolic of the fight for the future of coal. If we want to avoid dangerous levels of climate change, then we need to stop digging and burning coal - and that starts with not allowing the development of the Galilee Basin in Queensland,” said (spokesperson name) of (community group).

The Stop Adani alliance is made up of more than 100 groups around Australia. The Big National Doorknock has over 60 events happening in 53 different electorates and is part of the Stop Adani “Street by Street” campaign.

(second sample quote from spokesperson, or a different spokesperson) “We know that the majority of Australians are opposed to the opening of new coal mines, and they want to see some real action on climate change. We’re giving people a chance to communicate that to their politicians - to ask them to represent their constituents, instead of coal billionaires.”

(any additional info and comments)

(background information about your group)