As we head towards polling day, you might be wondering how the parties stack up on this critical issue.

The science shows us that Australia must slash climate pollution by 75% this decade to secure a safe future for us all.

To achieve this, a responsible government will ramp up climate and nature solutions that are here and ready to make our lives better, create new jobs and are good for people and our planet.

This includes: scaling up clean energy and phasing out polluting coal and gas, cleaning up our transport and protecting nature.

Read our break down of the Coalition, Labor and Greens’ policies below or check out our major party policy tracker for the details.

To see how independent or minor parties compare, check out our independent policy tracker.

Jump to how the parties compare on a particular issue:

The solution: Ramp up climate and nature solutions that are here and ready to cut climate pollution by more than half this decade.

The Liberal National Party (LNP) Government has committed to cut emissions by 26-28% by 2030. That’s half what the science says is the minimum needed for a safe climate, and is consistent with putting the planet on a pathway to over 3 degrees of global warming.

The LNP has committed to Australia meeting a net zero target by 2050, but doesn't have a credible plan in place to get Australia there.

While that’s a big step up from the Coalition’s 2030 target it still falls short of what’s needed to keep global warming to 1.5 degrees.

The ALP has committed to Australia meeting a net zero target by 2050.

The ALP will adopt a recommendation to enhance the safeguard mechanism to drive down emissions from Australia’s biggest polluters, including by reducing pollution baselines gradually over time to meet its net zero target. Industrial polluters will be able to use offsets.

This would put us on a pathway consistent with limiting global warming to 1.5 degrees. The Greens plan is for a net-negative emissions economy. 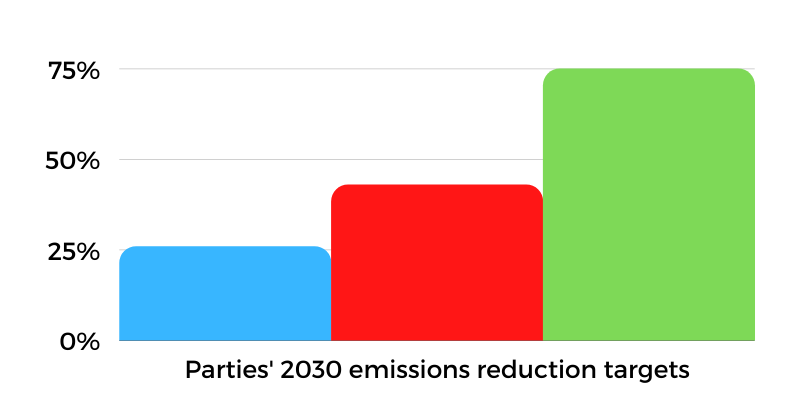 Cleaning up our transport

The solution: Take pollution out of transport. We can save our health and climate with more accessible public transport and electric cars, running on clean energy.

The LNP has provided some funding to support electric vehicle (EV) charging stations but does not support financial incentives to increase uptake of electric vehicles, nor the introduction of fuel efficiency standards to curb pollution.

The LNP’s electric vehicle policy – Future Fuels Strategy – was expanded to $250 million, including $178 million to support rollout of infrastructure for electric and hydrogen-powered vehicles.

The ALP has committed to develop a national approach to transition to a low or zero emissions transport sector and to work with industry, unions and states to develop Australia’s first National Electric Vehicle Strategy to increase EV sales.

Labor does not support the introduction of fuel efficiency standards to curb pollution.

The Greens have committed to making electric vehicles affordable and available, with a $2 billion infrastructure investment.

This includes $1.2 billion for domestic manufacturing of electric vehicles and their components.

The solution: Ramp up renewable energy to power our schools, government offices, sporting clubs, halls and libraries with affordable, clean energy by 2025 and replace coal and gas-burning power stations with renewable energy and storage by 2030.

The ALP will support the clean energy transition with a $20 billion investment to modernise the electricity grid.

The ALP also have plans to roll out 85 solar banks around Australia to provide cheaper electricity and install 400 community batteries across the country.

The Greens have committed to a 100% renewable energy by 2030 target.

They will build 25 gigawatts of renewable energy and storage in the next eight years and replace every coal-fired power plant in the country by 2030. Greens propose a $25 billion “futuregrid” fund and will invest $5 billion to put solar on public buildings including all public schools, TAFEs and public universities to allow for retrofitting and refurbishment of existing facilities to be green, accessible, and sustainable. 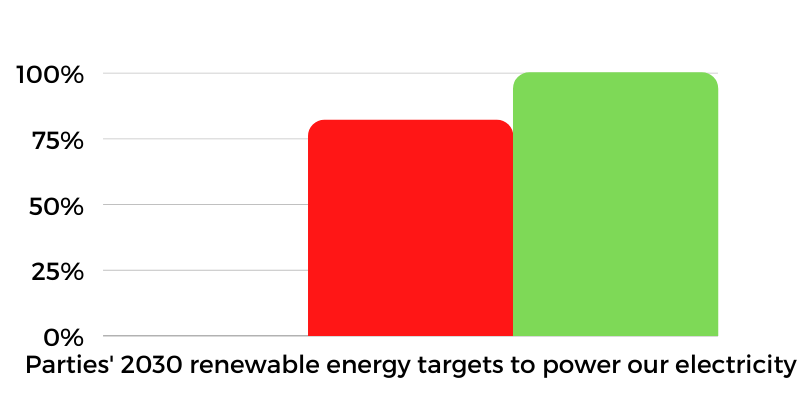 The solution: Replacing polluting coal, gas and uranium exports with clean energy and creating thousands of future-proof jobs in the communities that need them.

The Coalition supports an ongoing role for fossil fuel exports.

The LNP Government is investing $1.2 billion in Australia’s hydrogen industry.

Clean hydrogen projects have been paired with up to $285 million for Carbon Capture and Storage, raising concerns these projects will be powered by fossil fuels.

The ALP supports an ongoing role for fossil fuel exports.

The ALP is calling clean energy exports a jobs and economic opportunity, and will invest $3 billion of the National Reconstruction Fund to assist businesses investing in renewable technologies and to support new industries (such as green metals and hydrogen electrolyser manufacturing).

The Greens support phasing out thermal coal exports by 2030, and will immediately ban new oil, coal and gas infrastructure development.

The Greens would back a goal of 700% renewables in the coming decade, and use government investment to drive new export industries in green hydrogen and minerals processing.

The problem: Public money is handed to the coal and gas industry at a rate of $22,000 every minute. ³ Assistance to the fossil fuel sector cost $10.5 billion in 2021-22, with the fuel tax credit scheme the largest measure costing $8.07 billion. Direct subsidies increased more than fourfold to $11.6 billion over the same period.

The LNP has no commitment to end public funding of coal and gas industries.

The LNP accepts donations from fossil fuel companies and has no policy to ban these donations.

The ALP has no commitment to end public funding of coal and gas industries.

The ALP accepts donations from fossil fuel companies and has no policy to ban these donations.

The Greens have committed to end public funding of coal and gas and reinvest that money into the clean energy transition. Plans for the proposed Kurri Kurri gas plan will not go ahead.

The Greens do not accept donations from fossil fuel companies and have introduced legislation to ban donations from specific industries like coal and gas.

The solution: Create strong national nature laws that will protect and restore our forests, wetlands and bushland for our climate and for the animals that call them home.

The Coalition has not implemented the independent Samuel Review recommendations to strengthen national protections for Australia’s animals, plants and ecosystems.

The LNP’s proposed reforms focus on handing over national environmental decision-making powers to the states and territories with a set of national standards that are essentially a ‘cut and paste’ of the existing laws, providing no increased protection for nature. The LNP has not accepted proposals for an independent regulator.

The Coalition has announced funding to protect and restore nature including for the Great Barrier Reef, threatened species and habitat restoration, rivers, and a major investment in Indigenous ranger programs.

The Coalition signed the Kunming Declaration - which sets global targets for protecting and restoring nature - in October 2021, but has not been a positive leader in recent international negotiations.

The ALP has committed to work with stakeholders to reform national environment law and to provide a full response to the Samuel Review of the National Environment Act.

The ALP has announced they will establish an independent Environment Protection Authority to ensure compliance with environment laws and improve environmental data.

The ALP has announced funding to protect and restore nature including for the Great Barrier Reef, urban rivers, threatened species and habitat restoration and Indigenous rangers programs.

The ALP has called for strong and ambitious global goals and targets for the next decade to halt and reverse biodiversity destruction, and committed to protect 30% of land and seas by 2030.

The Greens will introduce strong, national laws that protect nature, stop pollution, and stop the extinction crisis. The laws will include strong environmental standards, and a ban on destroying koala habitat and the habitat of other threatened species. The Greens will create an independent watchdog to enforce them.

The Greens have announced funding to protect and restore nature including for the Great Barrier Reef, habitat restoration and reestablishing green space and Indigenous ranger programs.

The Greens have set a goal of zero extinction by 2030 and will invest in a mass greening and restoration program, to ensure we are protecting habitats for our native animals and plants.

Information on party policy and positions has been sourced from the parties’ websites and public statements. Last updated Friday 13 May.

¹The ABC’s Vote Compass data says climate change is the top issue for people’s vote. A recent survey of more than 500 readers of Australian Community Media's agricultural publications, found regional voters put climate change in the top two issues that mattered most. Australia’s biggest climate poll shows the majority of people in the city and the bush are positive about the benefits of greater climate action.