Australia is one of the world’s most biologically rich and diverse countries – boasting over 600,000 different types of plant and animal species. But we’re also a world leader in species extinction – we’ve caused the extinction of more mammals than any other country, and we’re third in the world for the total number of extinct and threatened animals.

Since colonisation, we have officially made over 100 species extinct. Scientists estimate the real number may be much higher.

And for the incredible array of animals and plants that still exist, many are sitting the national List of Threatened Species.

What are the classifications for threatened species?

Australia’s list of threatened species for plants and animals classifies them under a spectrum of categories from Extinct, Extinct in the wild, Critically Endangered, Endangered, Vulnerable to Conservation Dependent.

The categories align with ICUN classification – the International Union for Conservation of Nature (IUCN) - the world’s oldest and largest global environmental organisation, of which ACF is a proud member.

Of the not-yet extinct categories, critically endangered species are most at risk. Once on this list, the probability of extinction is over 50%. On this list currently sit 17 Australian species of frog – including the quirky Elegant Frog – its traditionally wet habitat being threatened by rapidly expanding urban sprawl in Queensland and climate change, which is drying out rainforests.

Endangered animals don’t fare much better. On this list a range of iconic endemic animals – including the blue whale, the numbat, the koala and the Tasmanian devil. Endangered animals fall under this category if their population will decline at a high rate and its probability for extinction is over 20%. 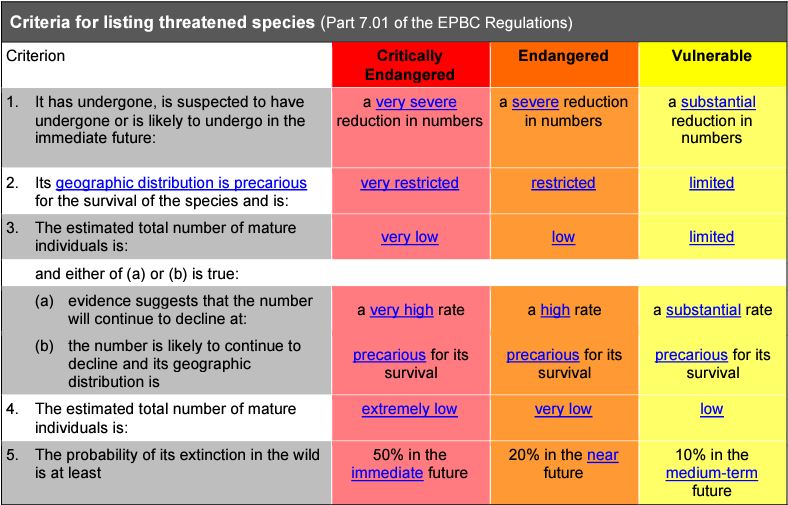 The categories threatened species can fall under. Source: DCCEEW

Australia is the only developed nation on the list of global deforestation hotspots. The type of land that's being destroyed isn’t easily regenerated either. The complexity of native ecosystems and the habitat needs of threatened species means animals and plants won’t necessarily thrive again if the bush is allowed to regrow. In fact 19 Australian ecosystems are now at risk of ecological collapse, experiencing changes from which they may never recover. We therefore need to halt and reverse nature destruction immediately so that by 2030 nature is in better health than it is today.

Other risks to threatened species include invasive species, the impacts of bushfires and importantly loss of climatic habitat and shifting ranges caused by climate change.

Of beauty rich and rare

Without strong action to protect threatened species our rare animals and plants may soon be gone. To ensure our precious animals and plants have a home for life we need strong environmental laws and a robust regulator who can enforce them.