Join the #StopAdani movement for a big day of action across the country on Saturday 7 October.

The #StopAdani movement is uniting for a big day of action on Saturday 7 October.

Together, we’re building an unstoppable movement in our campaign to #StopAdani, which our politicians are trying to ignore. If we want to move beyond coal, we’re going to have to spell out #StopAdani to our politicians. That's why we're asking you to join forces in creating human signs so big that they can’t be ignored at iconic locations across Australia! 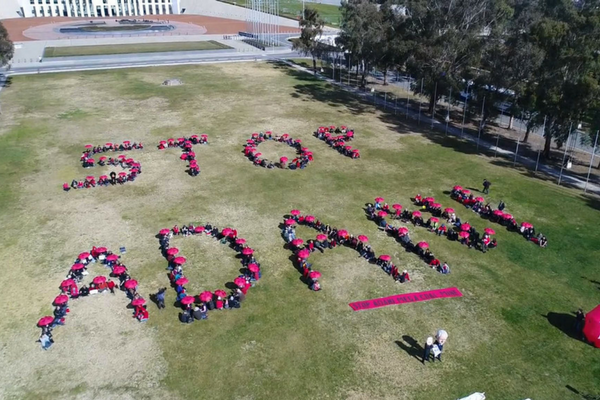 The #StopAdani human sign outside Parliament House in August this year sent a strong message to MPs ahead of the NAIF Senate inquiry.

Attend a #StopAdani human sign stunt near you! Let’s show all sides of politics just how huge our movement is with thousands of people forming huge #StopAdani human signs. ACF is leading the way in Melbourne and our partners in the movement are hosting events right across Australia on Saturday 7 October.

In early September, ACF legends Kenny, Sharon, Clare and Lindsay went to Canberra to deliver ACF’s biggest ever petition to seventeen politicians and their staff. The petition was signed by 164,835 people from the ACF and GetUp! communities, calling on Prime Minister Turnbull to rule out handing over a billion dollars of public money for Adani’s mine.