Environment groups representing more than 1.5 million Australians will be campaigning together this election in an unprecedented coordinated effort, calling for all candidates and parties to have strong policies to address global warming and transition to clean energy.

Environment groups representing more than 1.5 million Australians will be campaigning together this election in an unprecedented coordinated effort, calling for all candidates and parties to have strong policies to address global warming and transition to clean energy.

The Government has thus far attempted to avoid climate change as an election issue, but polling conducted last week shows it will be a vote-shifter.

Recent polling by ReachTel shows Australians want the next Government to phase out coal-burning power stations and transition to renewable energy.

By election day it’s expected their supporters will have had more than 130,000 conversations about climate. They will have knocked on at least 30,000 doors, made at least 100,000 phone calls, and held over 100 election-focused community events across the country. Groups will also be enrolling thousands of young people who are particularly concerned about the impacts of global warming.

The collaboration’s goal is not to tell people who to vote for, but to advocate for all parties to have good climate policies.

“We are urging all parties to set out their plans to get Australia off coal, into renewables and to make our use of energy much more efficient.”

“The Great Barrier Reef is fighting for its life – and this election will decide whether it survives. The majority of Australians love the Reef and want to see it protected, in their lifetime and for generations to come. The next Australian government must do a lot more to ensure our natural wonder isn’t ruined by global warming and the mining and burning of fossil fuels.”

“Young people are seriously concerned about the mining and burning of fossil fuels that is driving dangerous global warming, risking the Great Barrier Reef and our future. We know this means we need to shift to clean energy but the Government has held us back and if we’re not enrolled to vote we’ll miss out on having our say.”

“The transition to 100 per cent clean, renewable power is happening now - without strong policies that support an orderly transition Australia will miss out on our $800 billion slice of the global renewables investment boom. Australians are already voting with their feet, with 1.5 million households experiencing the benefits of clean energy, and we’re confident that people will express their support for solar and renewable energy at the ballot box.”

“The Prime Minister has spoken about the need to transition the economy from one dependent on mining. It is clear from this poll that an increasing number of Australians support that goal on climate change grounds. It is also clear that the vast majority of Australians recognise that we need new and powerful laws to manage that transition and to protect the places we love from the impacts of climate change.”

“From the thousands of conversations we’ve been having, voters in key Victorian seats like Deakin and Dunkley are absolutely ready for the next Australian government to begin phasing out coal burning power stations and embrace a renewable energy future. It’s time both major parties caught up with where the community is at.”

Where the parties stand on climate, rivers, forests and wildlife 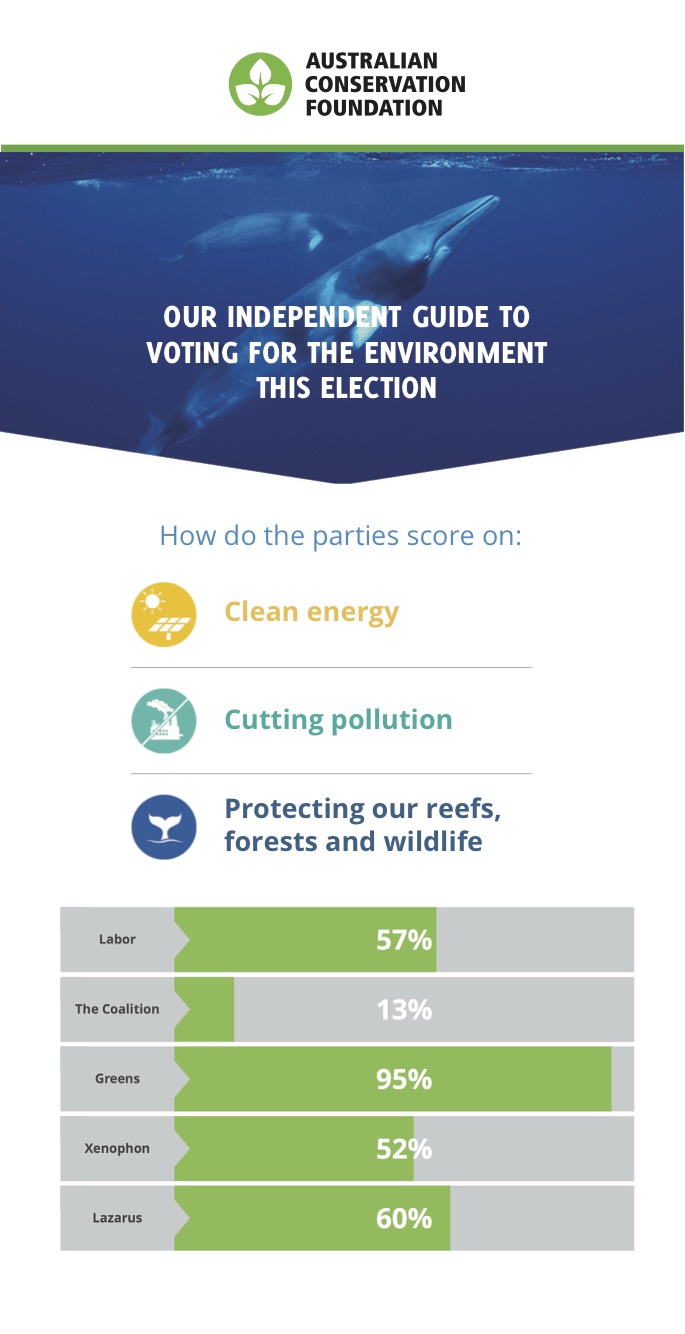