“From little things, big things grow” is what Paul Kelly once sang about Vincent Lingiari’s stand to reclaim Gurundji Land. I think this story is a similar one of small beginnings, big impacts.

Starting today nuclear weapons are officially unlawful thanks to the landmark United Nations Treaty on the Prohibition of Nuclear Weapons coming into force. Remarkably, it is the first ever global ban on these weapons that threaten people and all living things.

The story started here in Australia, in Melbourne, 14 years ago, when a handful of people founded the International Campaign to Abolish Nuclear Weapons (ICAN). Most of the people in the room were volunteers. One of them was my colleague and friend ACF Nuclear Free Campaigner Dave Sweeney.

Together they have grown to become nearly 600 people-powered movements from more than 100 countries united in a call to end nuclear weapons. The Australian Conservation Foundation is proud to have been a partner from the start.

Together they have won hearts and minds, and in 2017, the prestigious Nobel Peace Prize. Now they have pushed for, promoted, and advanced a global treaty that bans nuclear weapons, just as chemical and biological weapons, and landmines are banned.

Today’s news, this incredible win, a ban on nuclear weapons, is a testament to what persistent, long-term people-powered campaigning can achieve.

But this story is not over yet.

If you haven’t already, sign the petition calling on our elected representatives to make Australia nuclear-free which includes ratifying the nuclear weapons ban treaty. 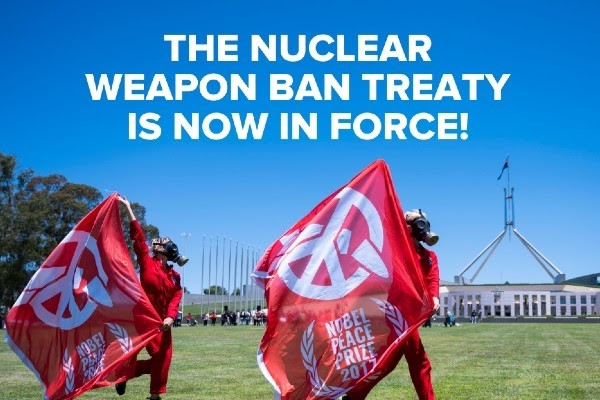 This is our chance to be on the right side of history and international humanitarian law.

From the tragedies of Hiroshima and Nagasaki to the shadow of the Cold War and the impacts of 2,000+ weapons tests – the devastating legacy of nuclear weapons still lingers in the communities and places we live.

Ratifying the treaty comes with an obligation to assist people, land, water and wildlife affected by nuclear weapons use or testing.

Given Australia’s weapons testing history in Maralinga and Emu Field, South Australia, and Montebello Islands, Western Australia, we should be ratifying the treaty and taking responsibility for the fallout and impacts of these tests.

While there is still much work to reach full nuclear disarmament, the weapons ban treaty now provides us a clear framework and pathway to achieving it. It is our best hope for ending our worst weapons.

Let’s take hope in knowing that “from little things, big things grow” and be bold in what we do in 2021.

Read more about the origins of ICAN and how it became the first Australian-founded organisation to win the Nobel Peace Prize.