This month we’ve taken a dive into the federal budget.

There were a few positive commitments, but even as the pressure on Australia grows ahead of the major UN climate change meeting in December, the Morrison Government chose to shun the economic path many national leaders are taking to help get to zero emissions.

We also explain the government’s moves to undermine our renewable energy agency so it can fund fossil fuel related technology, and to provide more public funds to back gas fracking in the Northern Territory – and what we’re doing to stop it!

ACF’s Community groups have had a busy and successful month meeting local parliamentarians and campaigning around the country. Find out what they’ve been up to and get inspired.

Energy and Emissions Reduction Minister Angus Taylor last week unveiled a regulation that would allow one of Australia’s successful green banks to fund carbon capture projects and hydrogen produced from coal and gas.

It’s the Liberal-National Coalition government’s latest attempt to undermine the Australian Renewable Energy Agency (ARENA) by expanding its role to allow it to fund carbon capture projects and hydrogen produced from coal and gas. That directly conflicts ARENA’s intended role to support the uptake of clean renewable energy technologies.

Set up in 2012, ARENA has invested $1.67 billion into 579 innovative renewable energy projects, realising $6.84 billion in value for the Australian government.

What’s behind it? The Minister’s Australian Renewable Energy Agency Amendment (2020-21 Budget Programs) Regulations 2021 came into force on 14 May. The instrument means ARENA could become a financier for coal and gas industries by funding any projects that could be seen as a ‘low-emission technology’ (with the ‘widest possible meaning’); and industries that the government has prioritised in its Technology Investment Roadmap (which includes carbon capture projects and hydrogen produced from coal and gas).

What will happen in parliament? Minister Taylor tabled this instrument on 24 May in the Lower House. Labor climate change spokesperson Chris Bowen made it very clear the Opposition does not support this change to ARENA, which it created when in government. ACF expects Labor, Greens and crossbench senators to question the minister and officials in Budget Estimates hearings about this change to ARENA.

The Senate Standing Committee for the Scrutiny of Delegated Legislation will automatically look at whether this instrument complies with the law. Given it appears to contradict the ARENA Act’s express objective to support renewable energy, not facilitate fossil fuel generation, we hope this will see the Committee question the Minister about his legal advice.

What is ACF doing? ACF is speaking to Labor, Greens and crossbench MPs and senators in both houses about moving motions to disallow or repeal this instrument. It will however take 39 votes in the Senate to repeal it, which means one Coalition or One Nation senator would need to support a disallowance motion. The Abbott Government’s attempt to abolish ARENA failed in 2014 thanks to strong support from Labor, Greens and crossbench senators voting against the government’s bill. We’ll stay in touch with you on actions you can take to support ARENA.

The Morrison Government has moved to hand out $50 million in public funding for gas drilling in the Northern Territory’s Beetaloo Basin, despite the concerns of Traditional Owners and the massive environmental risks fracking poses.

The Beetaloo Basin, 500km south-east of Darwin, is one of five Australian shale gas fields the Morrison Government wants to open up for production under its "gas-led recovery".

The federal and Northern Territory governments are pushing hard to unlock Beetaloo for gas production by 2025.

This is despite local Traditional Owners expressing very strong concerns about fracking for gas which risks damaging underground water sources and important cultural heritage. Traditional Owners are also concerned about dodgy consultation around the governments’ plans to frack Beetaloo.

What’s behind it? In December 2020, the Morrison Government announced it would give $50 million in grants to companies to drill for shale gas in the Beetaloo Basin. Resources Minister Keith Pitt registered the Industry Research and Development (Beetaloo Cooperative Drilling Program) Instrument 2021 last week and it is now in force. This legislative instrument, or regulation, brings the Morrison Government’s pledged investment in gas exploitation in the basin to more than $200 million.

It provides $50 million to the Beetaloo Cooperative Drilling Program which has been open for applications for some time. The grants were advertised to gas companies before the regulation was even made and are now available from 1 July.

What will happen in parliament? Minister Pitt tabled the instrument on 24 May in the Lower House. Independent MP Zali Steggall immediately gave notice of a motion to disallow (or repeal) it, which means a vote in the Lower House on her motion must be held before 4 August. We expect to see similar motions in the Senate soon.

The Senate Standing Committee for the Scrutiny of Delegated Legislation will assess the Beetaloo instrument to ensure it complies with the law and meets expectations about parliamentary scrutiny, and report back to the Senate.

What is ACF doing? ACF and our allies are speaking to MPs and senators about moving motions to disallow, or repeal the instrument in both houses. It will however take 39 votes in the Senate to repeal it, which means one Coalition or One Nation senator would need to support the disallowance motion. We’re also expecting Greens and other senators to ask questions in Budget Estimates hearings.

Budget a missed chance for a positive climate action

Instead of grasping the opportunity to renew Australia and kick start the post-pandemic economy by investing in climate solutions and environmental protection in the 2021-22 federal budget, the Morrison Government has promised even more funding to support polluting fossil fuel mining and generation.

Continuing to push the false narrative that fossil fuels will drive growth and jobs, the governments’ budget will, in fact, increase the costs of climate change and environmental degradation in missed economic activity and employment opportunities.

“Environment and climate spending represented less than 1% (0.8%), or just 80 cents of every $100 in this budget,'' said ACF’s Economy and Democracy Program Manager, Matt Rose.

The budget papers barely mention climate change but indicated the government expects spending to actually fall to 0.2% in 2022-23. Funding for biodiversity protection – threatened species and ecosystems – has fallen 28% since the Coalition was elected in 2013.

ACF was denied access to this year’s pre-budget lock-up, continuing a new exclusion imposed by the Morrison Government. 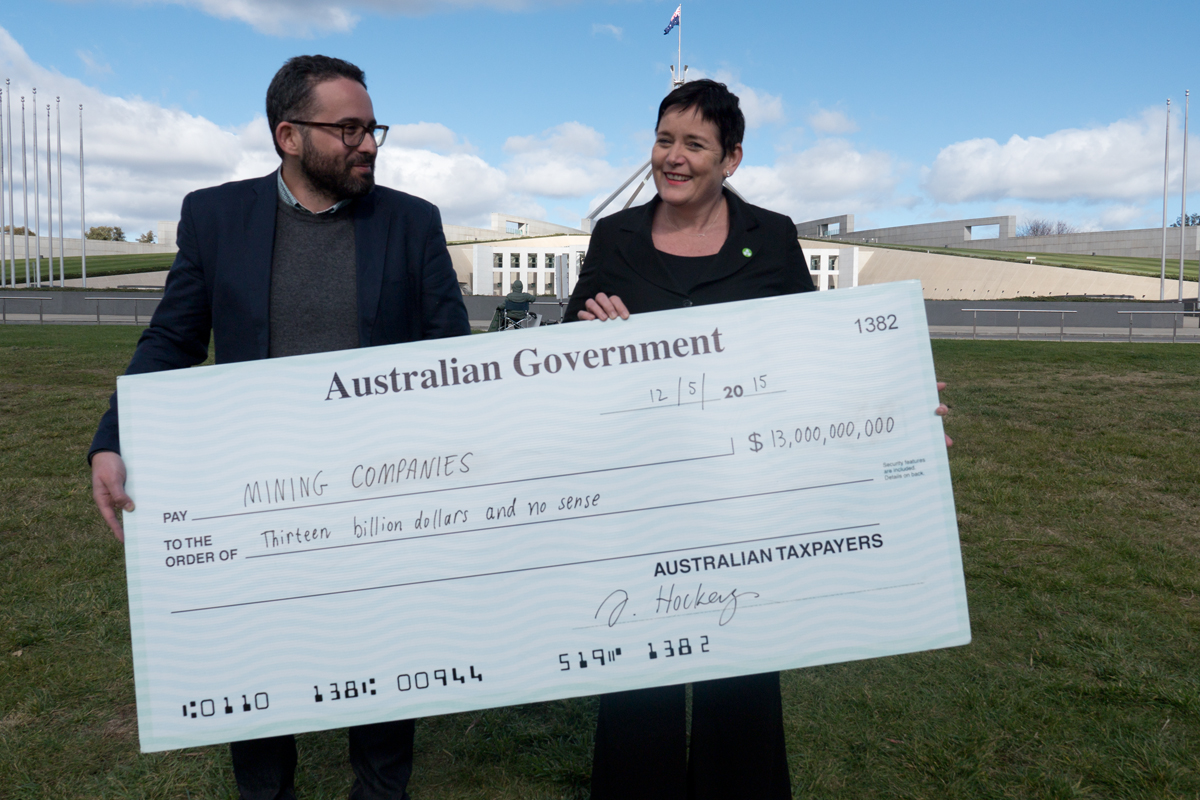 What was good (we hope) in the budget?

What was bad in the budget?

In this month’s update we have some excellent stories from ACF Community groups who are building local relationships and alliances to jointly advocate for climate and nature solutions.

ACF Brisbane Northside and ACF Community Bayside joined birding groups and Cleveland residents for a “Lights in the Mud” event on World Migratory Bird Day to demonstrate their opposition to Walker Corporation’s proposed Toondah Harbour development. The development is likely to destroy about 40 hectares of the internationally significant Moreton Bay Ramsar wetland which is critical habitat for the migratory Eastern Curlew. ACF Bayside worked hard to promote the event in local media and run it on the day.

ACF Community Prom Area Climate Action met Federal Liberal MP, Russell Broadbent for the second time on a local farm that operates sustainably. Dairy farmers joined the group and Russell to discuss the many changes they are making to reduce their carbon footprint. Following the meeting, Russell agreed to hold a community meeting to talk further about climate action and was inspired to release a video relating the experience.

ACF Community Griffith recently met with Queensland MP Joe Kelly, member for Greenslopes and Deputy Speaker. The group asked about the Queensland government’s Climate Action Plan and discussed the need for a Queensland Climate Act and more action on climate change. The group also met for the first time with Queensland MP Amy McMahon, the newly elected Greens member for South Brisbane. The focus of the meeting was to introduce ACF and get to know Amy and her priorities. The group explained the need for a Climate Act for Queensland and asked her to hold the Queensland government to account on their renewable energy election promises and to raise climate change in the local newsletter.

ACF Community Canberra joined the Multicultural Association of Canberra (MAC) for a screening of the inspiring documentary, 2040. Local Liberal Member of the ACT Legislative Assembly, Nicole Lawder attended the screening and spoke to members of both groups about the need to address climate change. The ACF Canberra group has built a supportive partnership with MAC over the last two years and MAC is keen to participate in its landcare activities and organise speakers to continue the conversation on climate action.

Members of ACF Community Bendigo District met with the City of Greater Bendigo Councillors to discuss the group’s plan to build an alliance of environment groups working to reduce emissions in the local community. The meeting was received well and the Councillors appeared keen to commit to the idea.

ACF Community Toowoomba held their second market stall at Queens Park Market and their first monthly meeting with a number of new people attending. They are very excited to be a “real” group after many months of preparation! 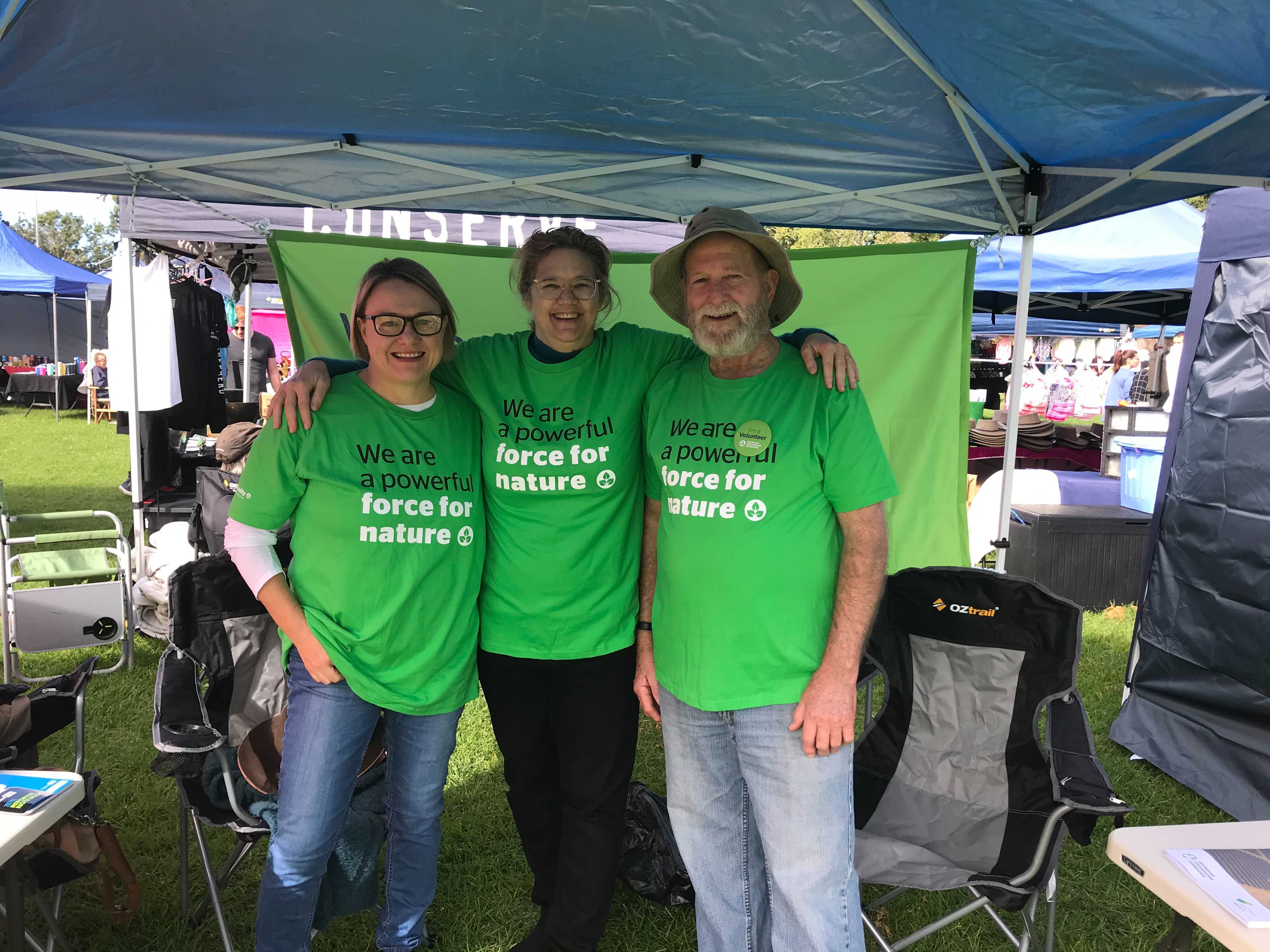 Throughout May, 150 supporters in our Rapid Response Teams delivered a consistent and strong social media message to the big 4 banks demanding they step up for our climate and stop lending money to support polluting gas mining projects. The banks certainly heard them. NAB deleted their own Facebook post, and then reposted it a few days later without people’s comments. Commbank did the same thing on LinkedIn and hid a lot of our comments on Facebook too.

And as always, check out our upcoming trainings on our training calendar!

There can be no climate action without renewable energy transmission lines