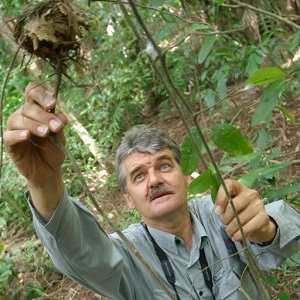 Due to forecast rain tomorrow, this event has been postponed. A decision on when it will be held will be made soon.
Join the Australian Conservation Foundation Brisbane South & Logan for a guided bush walk with Dr Richard Noske, pictured above. Richard was senior lecturer in Biology at Charles Darwin University for 26 years before moving to Brisbane in 2010. His main interests are avian breeding biology, foraging ecology and the flowering patterns of eucalypts. He has written and co-written three books and 120 peer- reviewed journal articles.
As President of Birds Queensland from 2012-2015, Richard co-founded the Learn About Birds project, teaching school children about birds and conservation in Karawatha Forest. After discovering several species of eucalypts that are rare or absent in the northern suburbs where he lives, Richard now conducts monthly surveys of flowering eucalypts, paperbarks and Banksias in the forest. His interest in the area only grew after meeting and becoming friends with the forest’s saviour, Bernice Volz.
We will follow Richard along his regular transect which starts at the Elizabeth Street entrance (off Railway Parade), down Wallum Track to Frog Hollow, then cutting across to Dianella Track, then along Wallaby Track to where it joins the Rocks Track. Returning to Elizabeth St via the Wallaby and Dentata Track - allow about four hours, while we stop and talk about what we see along the way.
FOR THOSE WHO PREFER, THERE WILL BE A SHORTER OPTION AFTER FROG HOLLOW. We will return with June to Elizabeth St and go by car to the Karawatha Discovery Centre, the amenities and picnic grounds.