Climate change is a public health crisis. It's why over 3400 health and medical professionals and organisations have signed an open letter calling on the Prime Minister to quickly cut climate pollution and replace Angus Taylor with someone who will actually reduce emissions.

Now it’s time to ramp it up – we’ve booked prime advertising space in The Australian for Monday when Parliament returns so we can send a united message to our elected representatives that health and medical experts demand action.

If you’re a health or medical professional, you can add your name by midday AEDT Friday 6 November and be published in our new ad?

Not a health or medical professional? Share this page to your networks on Facebook, or directly by email.

We write to express our professional concern about the ramifications of the failure of the Hon Angus Taylor MP to fulfil his responsibilities of the office of the Minister for Emissions Reduction.

We are health professionals and organisations bearing witness to the harm Mr Taylor’s failure to reduce emissions is causing to the health of Australians. We are also united by our concern about the climate crisis and the impact it is having on the safety and wellbeing of Australians and our neighbours.

Public health is inextricably linked to climate health. Climate damage is here now — and it is killing people. In failing in his responsibilities to reduce emissions, Mr Taylor is contributing towards rather than reducing the harm the following is now causing:

There is already a noticeable impact from increased frequency and intensity of bushfires, floods, dust storms, drought and extreme heat, biodiversity decline, and over-allocation, reduced quality and increased salinisation of freshwater in Australia.¹ As a result, Australians are already seeing higher rates of respiratory illness,² diarrhoea³ and morbidity requiring hospital admission⁴ during hot days, and higher rates of suicide in rural areas during drought years.

The burning of fossil fuels such as coal and gas that drives global warming is also a major contributor to air pollution - this silent killer is linked to the premature deaths of 3,000 Australians each year. Higher levels of air pollution are also associated with increasing illness and death related to ischaemic heart disease, chronic obstructive airways disease, lung cancer and asthma,⁵ ⁶ and also with adverse outcomes in pregnancy, including low birthweight and stillbirth.⁷ The annual cost to Australia from air pollution mortality alone is estimated to be $11.1- $24.3 billion.⁸

Mr Taylor is failing in his ministerial duties in three critical ways:

Our recovery from the impacts of Covid-19 must recognise that human health, economic health and environmental health are closely connected. The pandemic compels us to pursue a recovery that strengthens our resilience to future shocks; to our collective health, to economic frailties and to extremes of weather.This is a crucial time for Australia and the planet in addressing the climate crisis. Australia has one of the largest greenhouse gas emissions and highest per capita emissions in the world. Australia is one of the largest exporters of coal and gas. We urge you to immediately take meaningful action to reduce emissions and tackle climate change, and replace Angus Taylor with a Minister who is committed to this goal.

Check out the full-page ad we ran in last Monday's The Australian: 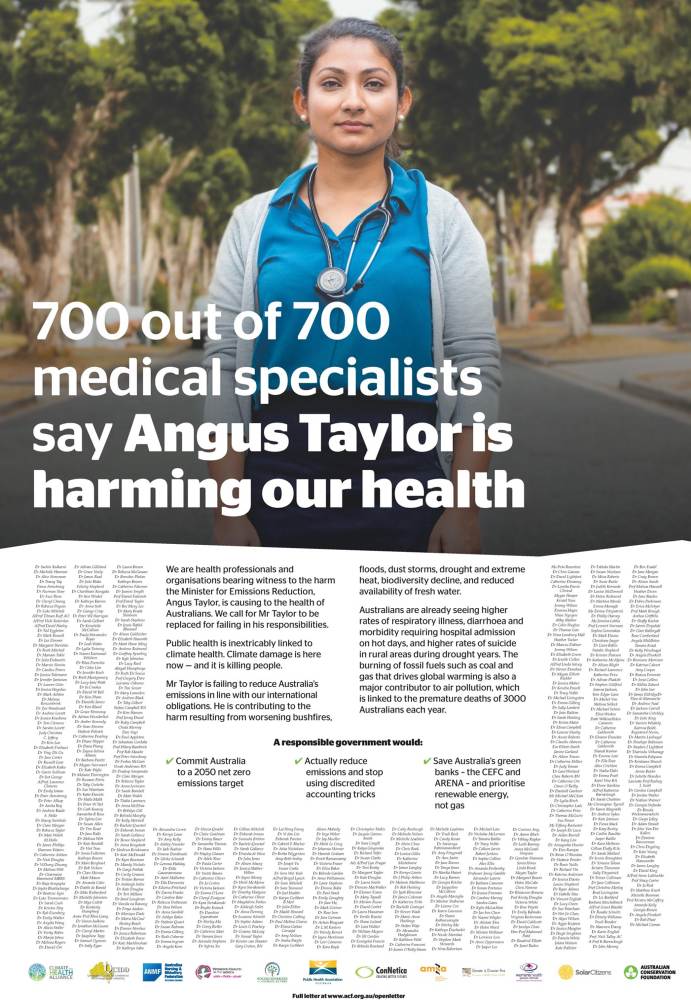 When it comes to the climate crisis, so much is at stake. We simply don't have time for Ministers who can’t or won’t do their job to cut climate pollution. They’ve acted on health and medical evidence and advice during the pandemic – it’s time they do the same to address the climate crisis.