Last week, just days after the Federal budget was handed down, 49 species of plants and animals were quietly added to the national threatened species list, writes James Trezise

The sad fact is the environment barely featured in last Tuesday's budget. Frustratingly, there was no money specifically allocated for threatened species recovery. Overall, the federal environment budget is forecast to decline by 17 percent over the next four years. Severe cuts to the CSIRO land and water division will exacerbate the knowledge gap for how to recover our biodiversity.

At a time when Australia finds itself in the midst of an extinction crisis, our government's policy settings continue to take us in the wrong direction. Just last week in Queensland it was revealed that the koala is on a fast track to extinction in the south east, with studies showing that its population has crashed by 80 percent in the past two decades.

Amongst those species added to the list were charismatic mammals such as the broad-toothed rat, the greater glider and the swamp antechinus (all now listed as vulnerable), alongside less well-known critters such as the critically endangered flathead galaxias or the endangered Eltham copper butterfly. 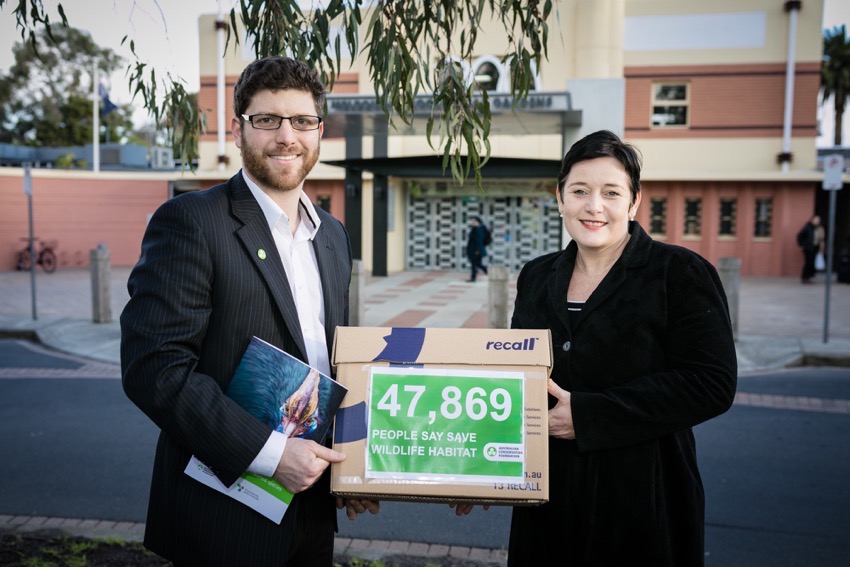 This significant jump in the number of species on Australia's national threatened species list was surprising. Australia now boasts 1,872 animals, plants and ecosystems that are threatened with extinction -- this is up from 1,483 sixteen years ago. Ninety species are now declared extinct, with a small fern joining the ranks of species lost to science last week. For a country that is considered one of the few global mega-diverse nations on the planet, our growing list of species threatened with extinction is a shameful indictment on our leaders.

It will surprise many Australians to know that being added to the national threatened species list under our national environment law, the Environment Protection and Biodiversity Conservation Act, does not trigger any windfall in government funding for species recovery. The only real protection comes from national assessment of development impacts, and even these are full of discretionary loopholes that often entrench further species declines.

There is no silver bullet for saving biodiversity. The threats our wildlife and ecosystems face are immense. Climate change, habitat loss, invasive species, fire regimes, disease and exploitation are all at the top of the list. The solutions to these problems can be as complex as the ecosystems themselves, such as tackling a deadly fungus that is wiping out our frogs or treating a deadly facial tumour that is decimating Tasmanian devil populations.

What we do know is that resources are desperately needed, to both understand the biology and threats to our vanishing biodiversity, but also to implement the actions for them to recover.

There are currently 446 national recovery plans covering an even larger number of species and ecological communities in Australia. For the most part these documents are currently sitting on shelves with no money available for implementation. In the broader economic context implementing these plans is not that expensive, and averages out at about $100,000 each year. Some are relatively simple and cheap to deliver, such as fencing around an endangered plant, while others can be far more complex and costly.

The same day of the listing of these 49 species, the government released the recovery plan for the critically endangered regent honeyeater, which historically occurred across the southern part of the Great Dividing Range. There are only approximately 400 birds left in the wild and it is estimated that $3.1 million is needed over five years to fight off its extinction, money that is currently not allocated. To put that in context, the Turnbull Government's Threatened Species strategy launched last year covers only 40 species and was allocated just $6.6m nationally. The funding is welcome -- but it is far from sufficient.

Like in healthcare, early prevention is often the better and cheaper solution.

The problem facing biodiversity is not just one of funding. Like in healthcare, early prevention is often the better and cheaper solution. In many cases, stopping the further loss of critical habitat is one of the most efficient means of halting and potentially reversing declines in threatened species.

But all too often, among decision makers and ministers hypocrisy and grand gestures are seen as a sufficient substitute for meaningful action. This was plain to see last week. At the same time the swift parrot was up-listed to critically endangered, the Turnbull government announced its support for the continued logging of its breeding habitat in Tasmania, an activity exempt from national law under 20 year old agreement. A similar situation faces the greater glider and critically endangered Leadbeater's possum in Victoria.

Australia's biodiversity is core to our national identity. We are taught about our amazing wildlife and landscapes from a young age. Ours is a rich natural heritage that is literally vanishing before our eyes. Recent Australian Bureau of Statistics research reveals that our economy and our society depend on the health of our environment to the value of almost six trillion dollars.

In the course of this federal election we need to be demanding a better deal for our environment -- a deal that will enrich us as a nation. That means making sure our politicians commit to better laws to protect critical habitats and deliver more funding to restore our threatened species.