Australia’s coal and gas exports make us one of the biggest carbon emitters in the world, and the consequences will be felt for decades to come.

Australia is the world’s top exporter of coal, and the world’s largest exporter of liquified natural gas (LNG). Together, these fossil fuels have represented over 25% of Australia’s exports on average over the last 10 years.

We share one atmosphere: wherever Australia’s coal and gas is burnt – it’s driving the devastating climate impacts we’re already feeling like dangerous floods and bushfires.

However, our other major exports are also mega-carbon contributors. They fall into two categories: goods with high-embodied emissions, (like beef and aluminum produced using high levels of fossil fuels), and inputs into high-emissions or energy-intensive products, (like iron ore and metallurgical coal). 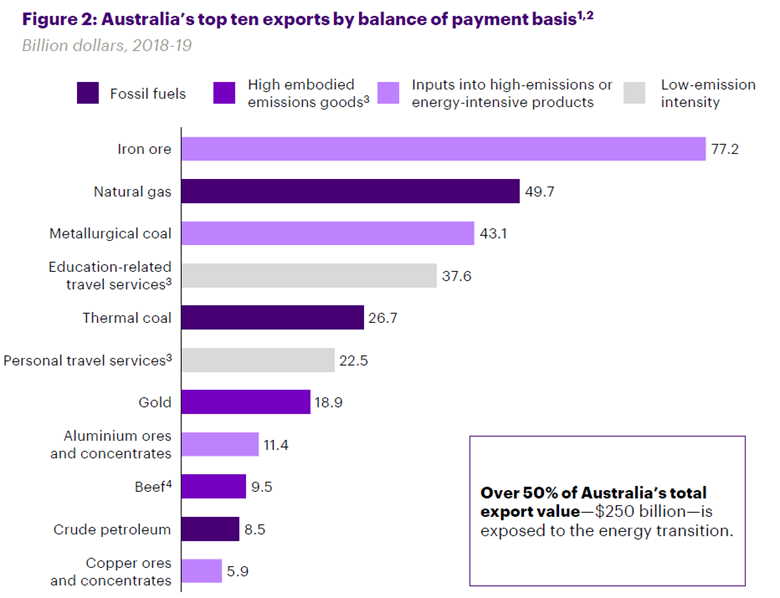 Our top 10 exports (in the graph above) represent 60% of Australia’s total export value and 16% of our GDP, of which 97% are fossil fuels or have high embodied emissions.

Most countries in the world, including all of our our major trading partners are moving to net-zero emissions in their economies by 2050-2060. The EU has adopted a Carbon Border Adjustment Mechanism (CBAM) which will require importers to report on their embodied emissions in carbon-intensive products like aluminium, steel and fertiliser.

The carbon intensity of Australia’s exports is not only contributing to global climate change, but also making us vulnerable to changes in the global markets moving quickly away from carbon emissions. Countries with more renewable energy powering their products and services will have a competitive advantage over those continuing to rely on fossil fuels for energy supply because of the embodied emissions, or emissions associated with the product or service. Unless we transition to renewable energy, Australia’s economy is very vulnerable to major economic shifts over the coming decades.

Renewable energy with storage is now recognized as the cheapest form of energy generation.

Given manufacturers in NSW have had to shut down in 2021 over rising gas prices, renewable-powered manufacturing is not only better for the climate, but also for business.

For example, if every part of the supply chain for aluminum is powered by renewable energy, it will become more attractive for buyers than coal or gas-powered aluminum.

If Australia’s exports continue to rely on fossil fuels, we will be left behind as the rest of the world quickly transitions to clean energy and net-zero emissions in their economies. Our trading partners will no longer want to buy what we are selling if it is contributing to climate damage.

Australia has always sold energy to the world – and we can continue to do that. We have world-leading renewable resources: abundant sun and wind, critical metals and minerals, renewables expertise and strong trading relationships. It’s time for the next chapter in the Australian story: renewable-powered exports.

We can maintain and even grow the strength of our traditional industries and become a global climate leader if we embrace the potential of exporting renewable-powered products and services.

But we’re not the only country who could seize the renewable exports opportunity. After a decade of political inaction, we need to put our foot on the accelerator, now.

That’s why we need genuine national leadership to secure our future.

We need the federal government to invest in a renewable export industry rather than trying to further expand fossil fuel exports at the detriment of our climate and the long-term resilience of our economy. We have to choose where we direct our people, skills and energy, and public money.

What are renewable exports?

Renewables are our future